The US had dropped the most powerful non-nuclear bomb, GBY – 43/B, Massive Ordnance Air Blast Bomb (MOAB) in Nangarhar province of Afghanistan on ISIS targets. The bomb was aimed at destroying caves and other hideouts of militants and ISIS personnel.

According to US authorities, this massive munition was dropped at 7:33 pm local time on 13th April 2017. In the Nangarhar area, US troops are performing counterterrorism operations regularly, there are about 8400 US troops in Afghanistan. 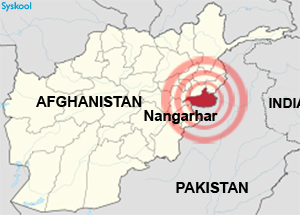 In Afghanistan, NATO is also training and assisting Afghan army and police to fight in counterterrorism operations. But the US is separately operating its operations against terrorists. In Afghanistan, ISIS started growing in 2015, in the eastern province Nangarhar (Pakistan border) Achin district is under a major influence of ISIS-K.

Mother of All Bombs

This was its first use in any battlefield, earlier US had used BLU 85 on various occasions, during Vietnam wars. BLU 85 was a Daisy Cutter bomb of 15000 pounds. Unlike GBY – 43/B, BLU 85 was an unguided bomb.

In 2007, Russian military claimed to have developed a weapon four times more powerful than GBY 43/B.

How US MOAB works?

United States uses MC-130 Talon of US Air Force Special Operations Command for dropping this huge bomb. Using drogue parachute this MOAB is pulled out of the cargo ramp of aircraft and then released. After release, the grid fins of bomb opens up and guides the weapon to target using GPS satellites. The bomb explodes in the air before hitting the ground to cause a maximum effect in the area.

Need of Use of MOAB

The region of Nangarhar province is widely affected by IS militants and Taliban groups. In this area, they are using caves to hide and it is not easy for other bombs and drones to cause damage inside those caves. But with the use of MOAB, they are able to create a massive explosion to clear tunnels and caves in the area. Also, the blast radius of the explosion is bigger that can be more effective.

Just to mention, a few days back, US had fired 59 Tomahawk cruise missiles on Syrian airbase, reacting against the use of chemical bomb by Syria on its civilian population in rebel area. Russia and Syria raised their protest against these missiles attacks along with Iran and China.

District Mineral Foundation fund (or DMF Fund) was constituted in 2015 as a benefit-sharing mechanism with mining-affected communities, recognizing them as partners...
Read more
COVID-19

A high-throughput communication satellite GSAT-31 is scheduled for launch by Arianespace, from French Guiana (South America) aboard Ariane-5 (VA 247) on 6...
Read more