India to reduce emissions intensity of its GDP

India has submitted its INDC to UNFCCC and pledged to reduce its greenhouse emissions intensity by 33 to 35 percent by 2030 from 2005 level. India also intended to achieve 40 per cent cumulative electric power installed capacity from non-fossil fuel by 2030. Apart from these two major announcements India has kept the goal of increasing forest and tree cover for an additional carbon sink of 2.5 – 3 billion tons.It has been estimated that a sum $ 2.5 trillion will be required for achievement of these goals by 2030. These goals are ambitious but achievable.

India is the fourth biggest emitter of greenhouse gases after China, United States, and the European Union. 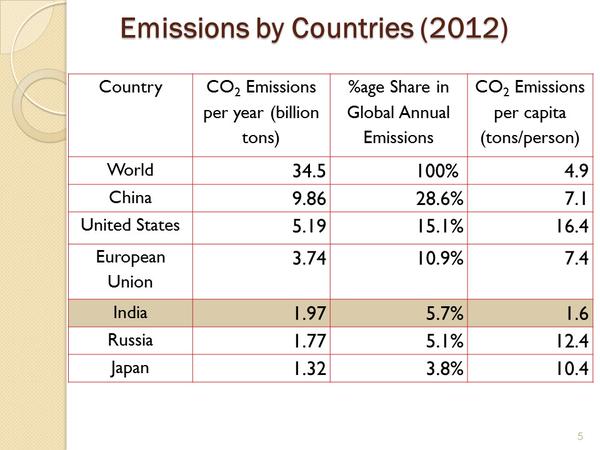 Must Read: Bali and Copenhagen Summits of UNFCCC (CoP 13 and 15)

Intended Nationally Determined Contributions (INDC) is a kind of promise by countries before United Nations Framework Convention on Climate Change.

India submitted its 38 page INDC just before the deadline of submission in final hours. It was asked by UNFCCC to submit individual goal from every country. Including India, 120 countries have now submitted their INDCs.

What it has to do with Paris Conference?

The Paris conference will begin on November 30 and will run till December 11. The INDCs are expected to become a part of the Paris agreement and countries will become accountable to what they have promised in their INDCs.

What are INDC targets of other countries?

Reduce emission intensity by 26 to 28 percent below 2005 levels in 2025; make best efforts to reach upper level

1. Achieve peaking of carbon dioxide emissions intensity around 2030 and make best efforts to peak early
2. Lower carbon dioxide emissions intensityper unit of GDP by 60 to 65 percent from the 2005 level
3. To increase the share of non-fossil fuels in primary energy consumption to around 20 per cent
4. To increase the forest stock volume by around 4.5 billion cubic meters on the 2005 level.

1. Reduce emissions intensity of its GDP by 33 to 35 percent by 2030 from 2005 level.
2. Achieve about 40 percent electric power installed capacity from non-fossil fuel based energy resources by 2030 with help of transfer of technology and low-cost international finance
3. Create an additional carbon sink of 2.5 to 3 billion tonnes of CO2 equivalent through the additional forest and tree cover by 2030.

Let its emissions intensity  peak between 2020 and 2025, plateau for approximately a decade, and decline in absolute terms thereafter.

Must Read: Chabahar Agreement: Path to the Future India-Iran Relation

District Mineral Foundation fund (or DMF Fund) was constituted in 2015 as a benefit-sharing mechanism with mining-affected communities, recognizing them as partners...
Read more
Environment

Global warming is the unequivocal and continuing rise in the average temperature of Earth's climate system. Since 1971, 90% of the warming has occurred...
Read more
COVID-19

The Niti Aayog’s task Force on Eliminating Poverty has put its weight behind the controversial “Tendulkar Poverty line” that ranks people earning less than...
Read more