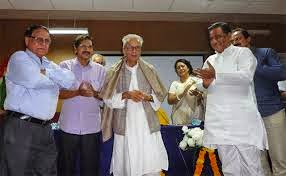 President Pranab Mukherjee conferred the 49th Jnanpith Award to eminent Hindi poet Kedarnath Singh for his outstanding contribution towards Indian literature. He was conferred this award at a function held at Balyogi Auditorium, Parliament Library Building in New Delhi.
Kedarnath Singh as a poet has offered a rare assimilation of rhymes and lyrical prose, exploring both the realms of reality and fantasy with equal felicity. His poetry presents a collage of meaning, colours and acceptance. He is the 10th Hindi writer to receive the award.

As an international organization, the United Nations was formed to promote and establish world peace and cooperation. The origin of the creation of UN...
Read more

Which one of the following statements is NOT correct? (a) All alkaline earth metals form hydrated salts (b) Barium and strontium are found free in nature (c)...
Read more

According to National Income committee, “National Income (NI) is the value of goods and services produced in an economy during a given period without...
Read more

The Vedic Period or the Vedic Age refers to that time period when the Vedic Sanskrit texts were composed in India. The society that...
Read more
Current Affairs

The Governors of Reserve Bank of India (RBI) is the chief executive of India's central bank and the ex-officio chairperson of its Central Board...
Read more
General Knowledge

Though disaster management has been an indispensable part of regular curriculum in schools the world over for quite some time, it is only for...
Read more