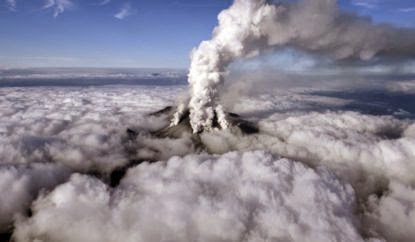 Volcano Mount Ontake in Japan erupted on 27 September 2014 killing more than 30 people and injuring as many people. The eruption led to pouring in of smoke and ash hundreds of meters into the sky. Ash was found on cars as far as 80km away.
The volcano erupted despite showing no indication that it was about to erupt with such force. An official at the volcano division of the meteorological agency said that although there had been a rising number of small earthquakes detected at Ontake since 10 September 2014, the eruption could not have been predicted easily.
There were no other signs of an imminent eruption, such as earth movements or changes on the mountain’s surface.
Geoscience of the Ontake Eruption
Japan is at a triple-plate subduction boundary between the Eurasian continental plate and the Philippine and Pacific oceanic plates.
As the denser oceanic plates dive below the low-density continental plate, water from the saturated sediments lowers the melting point of surrounding rock. That magma feeds a range of volcanoes mirroring the plate boundary.
History of Eruption of Mount Ontake
Last major eruption of Mount Ontake happened during October 1979 to April 1980. Since then the volcano showed no signs of eruption, although a minor phreatic eruption happened in 2007 and an unconfirmed similar eruption in 1991. Phreatic eruptions are steam-driven explosions caused by magma heating groundwater.
The volcano has been placed under a Level 3 alert by Japanese Meteorological Agency. The Level 3 alert warns everyone to stay away. It was put under Level 3 category in 1984 when the volcano had a major landslide which appeared to be triggered by an earthquake independent of volcanic activity, although ash mixed in the sediment likely increased the landslide’s mobility.
About Mount Ontake
The mountain is popular with weekend hikers, particularly in September and October when the autumn leaves are at their best. It is a popular site to view autumn foliage.
The mountain is located some 200 km west of Tokyo in between Nagano and Gifu prefectures. Its peak is 3067m high and the mountain is a popular hiking route, dotted with lodges, cabins and well-marked trails.
It is the second tallest volcano in the country second only to Mount Fuji. Mount Ontake is also known as Ontakesan and Kiso-ontake.
Frequent Eruptions
Volcanoes erupt periodically in Japan. Japan is one of the world’s most seismically active nations. There have been no fatalities since 1991, when 43 people died in a pyroclastic flow, a superheated current of gas and rock, at Mount Unzen in southwestern Japan.
- Advertisement -

JD(United) MLA Virendra Kumar Singh's son, Dr. Vivek Kumar, a doctor has secured an All India Rank 80 in the Civil Services Examination 2015. Despite his...
Read more

Benefits of Positive Attitude and Thinking

The key to a healthy and happy life lies in staying positive. Spreading positivity, happiness and cheer all around oneself keep the body fit and...
Read more

Law of Flotation of bodies

Law of Flotation of bodies : A body when wholly or partly immersed in a " -id experiences an upthrust which is to the weight of...
Read more

Garlic is one of the most common ingredients in Indian dishes but apart from imparting flavour to food, this tiny, white pod also has...
Read more
Culture

Peaceful Countries of the World

Denmark Denmark tops the list of the most peaceful countries on Earth since it’s really a safe place to live. Even while Copenhagen, the capital of...
Read more
General Knowledge

A mountain is a landform that rises high above the surrounding terrain in a limited area. They are made from rocks and earth. Things you...
Read more
General Knowledge

Mangal Pandey, whose name is often preceded by Shaheed meaning a martyr in Hindi, was an Indian soldier during the pre-independence era. A...
Read more
General Knowledge

5 Key Reasons Why You Feel Tired

Here are 5 Reasons Why You Feel Tired Acidic Cells - During the daytime, when sodium and calcium enter the cell and push out...
Read more