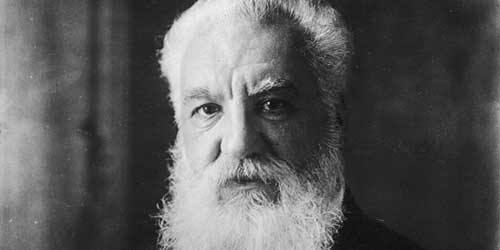 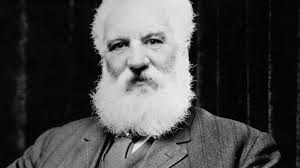 Alexander Graham Bell is most famous for his invention of the telephone. He first became interested in the science of sound because both his mother and wife were deaf.
Alexander Graham Bell experiments in sound eventually let him to want to send voice signals down a telegraph wire. He was able to get some funding and hire his famous assistant Thomas Watson and together they were able to come up with the telephone.

The first words spoken over the telephone were by Alex on March 10, 1876. They were “Mr. Watson, come here, I want to see you”. It turns out that other scientists had similar ideas. Bell had to race to the patent office in order to get his patent in first. He was first and, as a result, Bell and his investors had a valuable patent that would change the world.

They formed the Bell Telephone Company in 1877. There have been many mergers and name changes over the years, but this company is known today as AT&T. Bell was born on March 3, 1847 in Edinburgh, Scotland. He grew up in Scotland and was initially home schooled by his father who was a professor. He later would attend high school as well as the University of Edinburgh.

Alexander Graham Bell actually had many inventions and did experimentation in many areas of science. Some of this include:

Famous scientists and their Contribution or Discoveries