Dr. Bharti Dixit got one of the top 5 ranks in the prestigious IAS exams that too in her very first attempt. She was the only woman who made it to the top five slots of Union Public Service Commission Examination in the year 2013. Bharti gives the credit of her success to God and her Family for their support. 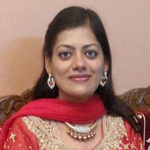 Bharti completed her schooling from Holy Child Auxilium, R.K. Puram in Delhi. She did her MBBS Graduate from Lady Hardinge Medical College of Delhi, was the top scoring woman candidate with overall fifth rank.

As Bharti was from a Science background, she was clear with her own subject Medical Science.

Bharti Dixit followed simple strategy for UPSC preparation. She said must read syllabus and an intuition of examiner’s expectations the candidate must know.  Bharti said she commenced preparation with NCERT books and built up her knowledge.

The factors behind Bharti’s brilliant performance in Civil Services Exam was Confidence that she had in herself and the next other thing was the Passion to excel and realise her dream which made her work very hard and achieve her goal.

Some of important questions answered by Bharti in an Interview

Bharti Dixit: I was interviewed by board chaired by Ms. Rajni Razdan with four other members on April 25, 2014. The uneasy moment was when they asked me about Ms. Durga Shakti Nagpal’s issue. They wanted to know my opinion on that issue and they were refuting my stands and arguments. However, I was firm on my stand till the end and finally they were pleased with the conviction with which I held on to my stands when everyone was going averse.

What was your preparation strategy for Prelims and Mains level exam?

Bharti Dixit:First thing about my strategy for Prelims was that I memorized the syllabus. Aptitude is something that a person always has with himself or herself so the aptitude test does not really require any serious preparation. But attending plenty of mocks tests is must. For preparing GS, the NCERT books and Newspapers are the best sources. First try to be thorough with primary sources and then go to secondary sources such as coaching materials.

Under strategy for Mains, first thing I did was the same, I memorized the syllabus. Mains preparation requires exhaustive study. Going through Government websites, Govt of India reports, approach paper for 12th Plan, ARC, Economic Survey, newspapers and magazines, etc is must. Listening to AIR spotlight, current affair, interview programmes, Rajya Sabha and Lok Sabha TV programmes is also a must. For essay practice, I wrote an essay on current happenings on daily basis. Also I prepared a few ideological essays with in-depth coverage. At the same time language papers also need to be taken seriously as many candidates even after scoring very good marks in GS lose because of their poor performance in language papers.

What was your strategy for interview?

For interview, I extensively prepared for probable questions around my profile with attention to even the minute details which may have been overlooked all these years, starting from the most incipient stages, schooling, college, job profiles and native place. I tried to analyse current happenings in-depth with unbiased opinion. I knew that just the problems are not to be highlighted but solutions to those problems were to be suggested. The most important part was my attitude to be confident and hold stand till the last. It’s all about being yourself. Interview is ideally a test of honesty and integrity of a candidate.

What was your optional subject at mains level? How did you divide your preparation schedule among the different subjects?

Bharti Dixit: My optional subject was Medical Science. My in-depth study of medical science during graduation gave me an edge as it saved a lot of time for coaching and learning so that I could spend more time on General Studies. It also helped me at interview stage as questions from graduation are inevitable part of one’s interview.

For General Studies paper, I did extensively-focused preparation of important and selected topics. My method was to learn something of everything (like topics which are difficult and not of my interest) and everything of something (most important topics and the topics which I like and have an interest).