Facebook
Twitter
Pinterest
WhatsApp
The dream is to enter the IAS cadre and N L Beno Zephine, who is visually impaired, is holding her breath until the marks for the Union Public Service Commission (UPSC) exam results are released in 15 days. 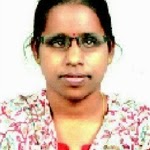 It was a tough few years of work, but Beno, 24, enjoyed it and has secured an all-India rank of 343 in the UPSC exams. “Preparing for the civil services made it easy for me to clear other competitive exams,” she said.
She got a few books Brailled, but much of her preparation was done with the help of her father and friends. “She would insist that her father read the newspaper to her every morning, and she was an exceptionally sharp observer,” said Sathya, MD of Strategy IAS Academy, who coached Beno to face the interviews along with experts at Manidhaneyam IAS Academy.
Beno is one of more than 100 candidates from Tamil Nadu who made it to the civil services this year. She had to juggle preparing for a PhD in English literature from Bharathiar University with a full time job as a probationary officer in SBI. “I learnt to balance both and understood how to use my time efficiently in the process,” she said.
She also downloaded the Jaws screen reader to get more information. Her father works for the railways and prompted her to get into a government job at a higher level and her mother is a homemaker.
Others like Sujitha from Chennai and Krishna Gopal Tiwari from Varanasi have made it to the IAS cadre, despite visual disabilities. Experts said that the uniformed services are, however, closed to people with disabilities.
Source – -TOI