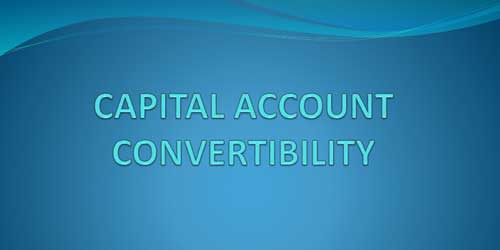 A currency is said to be convertible when it can be freely exchanged for other currency at market rates. Current account transactions are those dealing with payments relating to foreign trade, travel, and other services. Capital account deals with the transaction of financial assets. While India has made the Indian rupee fully convertible on current account, it is yet to accept capital account convertibility as a goal.

One reason prompting the policy makers to go slow on capital convertibility is the experience of Mexico. It was one of the largest recipients of foreign private capital ($28 billion in 1993). But with the devaluation of the peso and the collapse of the exchange rate, much of the capital fled the country. This catastrophic collapse was made possible by capital account convertibility, which encouraged even Mexican residents to convert their capital into dollars, precipitating the crisis. The similar situation arose in late 1997 in South East Asian countries also where their local currencies were hammered by speculators leading to devaluation of Indonesian rupiah by almost 58 per cent in one month.
While India made rupee fully convertible under current account, it was felt that the economy was not yet ready for capital account convertibility. The countries which went in for hasty Capital Account Convertibility in the 1980s had to face financial crisis. The thinking was that trade and domestic liberation process should be completed before CAC can be thought of. Many economists feel that Capital Account Convertibility will only help the drain of the Indian capital, which will get invested abroad. The present policy is to go slow on Capital Account Convertibility.
There is a school of thought represented by Prof. James Tobin, which even advocated an international tax on the financial transaction to prevent speculative flight in capital. After the 1994 Mexico crisis, the idea of a ‘Tobin Tax’ received fresh attention.
Don’t Miss:
Balance of payment on current and capital accounts.
Discuss the PROs AND CONS of Capital Account Convertiblity?