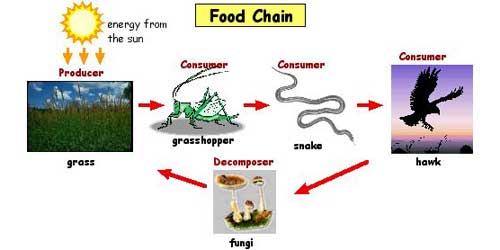 Every living plant and animal must have energy to survive. Plants rely on the soil, water, and the sun for energy. Animals rely on plants as well as other animals for energy. In an ecosystem, plants and animals all rely on each other to live. Scientists sometimes describe this dependence using a food chain or a food web.

A food chain describes how different organisms eat each other, starting out with a plant and ending with an animal.

Must Read: Classification of Food

Links of the Chain

The names depend mostly on what the organism eats and how it contributes to the energy of the ecosystem.

There is more grass than zebras, and more zebras than lions. The zebras and lions use up energy doing stuff like running, hunting, and breathing. Links higher up in the food chain rely on the lower links. Even though lions don’t eat grass, they wouldn’t last long if there wasn’t any grass because then the zebras wouldn’t have anything to eat.

In any ecosystem there are many food chains and, generally, most plants and animals are part of several chains. When you draw all the chains together you end up with a food web.

Sometimes scientists describe each level in a food web with a trophic level. Here are the five trophic levels: