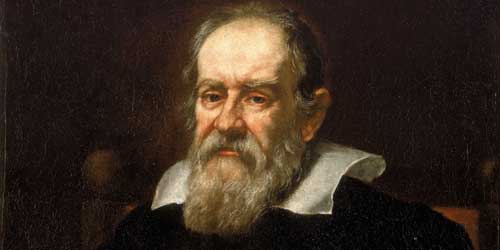 Galileo Galilei was born in Pisa, Italy where he grew up with his brothers and sisters during the Italian Renaissance. His father was a music teacher and a famous musician. His family moved to the city of Florence when he was ten years old. It was in Florence that Galileo began his education at the Camaldolese monastery.

Galileo Galilei was an accomplished musician and an excellent student. At first, he wanted to become a doctor, so he went to the University of Pisa to study medicine in 1581.

While at university, Galileo Galilei became interested in physics and mathematics. One of his first scientific observations was with a lamp hanging from the ceiling in the cathedral. He noticed that despite how far the lamp swung, it took the same amount of time to swing back and forth. This observation didn’t agree with the common scientific principals of the day.

In 1585, Galileo Galilei left the university and got a job as a teacher. He began to experiment with pendulums, levers, balls, and other objects. He tried to describe how they moved using mathematic equations. He even invented an advanced measuring device called the hydrostatic balance.

Galileo Galilei experiments made some people angry, however. They didn’t want the traditional views to be questioned. In 1592, Galileo moved from Pisa to the University of Padua, where he was permitted to experiment and discuss new ideas.

You May Also Read: The Planet Earth and the Universe

In 1609, Galileo Galilei heard of an invention from Holland called the telescope that could make far away items appear much closer. He decided to build his own telescope. He made great improvements to the telescope and began to use it to view the planets. Soon Galileo’s version of the telescope was used throughout Europe.

Galileo Galilei made many discoveries using his telescope including the four large moons around Jupiter and the phases of the planet Venus. He also discovered sunspots and learned that the Moon was not smooth, but was covered with craters.

As Galileo Galilei studied the planets and the Sun, he became convinced that the Earth and the other planets orbited the Sun. In 1632, he wrote a book called the Dialogue Concerning the Two Chief World Systems. In this book, he described why he thought the Earth orbited the Sun. However, the powerful Catholic Church considered Galileo’s ideas as heresy. At first, they sentenced him to life in prison but later allowed him to live at his home in Tuscany under house arrest. Galileo Galilei continued to write while under house arrest. In his later years, he became blind. He died on January 8, 1642.

People who changed the World