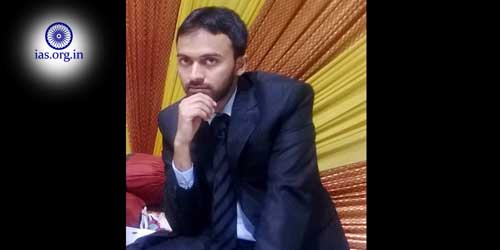 Mohammad Sana Akhtar who dreamt of being an IAS officer since adolescence brought laurels and has set a new example for those Muslim youths who aspire for Civil Services. He cracked UPSC Exam while doing his job in an IT company and achieved a rank of 211th. Akhtar owes his success to his parents as well as Aligarh Muslim University. He was motivated towards CSE as it provides ample opportunities to impact the life of so many people in a meaningful way that is difficult in most other jobs.

It must be noted that percentage of Muslims has hovered around 3% for last few years, although Muslims comprise about 13-14 % of the total population. Muslims are dismally represented in the top government services, often due to lack of education and unavailability of resources. They are roughly 2% in the Civil Servants in the country.

Mohammad Sana Akhtar comes from Muslim Community. His father is employed with Indian Telecom Industries (ITI) and has been posted in Mankapur, Gonda, U.P. He credits his success to his parents. He says, “I have inherited good qualities and traits of my parents that played an important role in success”. His father always has a positive attitude which views things positively and has always been hopeful towards things while his mother was a very keen observer.

Mohammad Sana Akhtar completed his schooling from St. Michael’s Convent School in 2006 and also secured first position in School. He did his bachelor’s degree in Computer Sciences from Aligarh Muslim University (AMU) in the year 2010. Just after completing his graduation he got placed in TCS one of the most prestigious IT company. After three months Mohammad Sana Akhtar switched over to European IT Company ST Micro Electronics in 2010 since then he continued to work with the same company. ST Electronics is basically a semiconductor company.

It is notable to mention here that Mohammad Sana Akhtar did not take any break from the job for preparing Civil Services. The working environment in his company helped him a lot. The work culture there in the company was really good, and which made it easier for Mohammad Sana Akhtar to prepare for the exam without leaving job. He took just 3-4 weeks of leaves before appearing for the exam for revision purpose.

Mohammad Sana Akhtar says that writing skill he developed due to encouragement and guidance of his school teacher who gave a lot of emphasis on English writing while he was in school and also the culture in AMU has motivated him to try at competitive examinations like UPSC.

It is interesting to mention here that Mohammad Sana Akhtar did not opt his Engineering subjects but opted Geography as an optional subject in the Civil Services Examination.

Mohammad Sana Akhtar said that “Geography was the easiest part of his preparation whereas General Studies was a bit tough. In order to qualify an exam one doesn’t need to study for hours but one should be focused when preparing for it. One should be very much expressive while writing, and should be able to put down his thoughts very quickly. Time Management is what I think plays a major role, if a person has chosen to go for the Civil Services Exam”.

Mohammad Sana Akhtar have gone through three attempts. The 2012 attempt was more like testing the waters without much preparation. 2013 attempt was serious but he couldn’t clear the prelims. In 2014, he cleared the exam with 211 Rank.

Mohammad Sana Akhtar used to read newspapers every morning while on way to his office. As it used to take almost one hour to reach the office, so he could easily get enough time to abreast himself with current affairs and happenings through newspapers. He got this reading habit as a culture in AMU. While on way back to home from office, Mohammad Sana Akhtar used to take a nap for almost one hour and by the time he reached his place he’s already refreshed and could easily study for 2-2.5 hours further which he thinks is good enough if it is at all  the in depth study.

He used to make up his mind that he would finish of one subject every month. According to Mohammad Sana Akhtar, “the reasoning part wasn’t that tough but for comprehension writing “Fluency in Ideas” is a must. For preparing one needs to study well and number of revisions do not matter what matter is how well you have grasped the things.

To write a good essay, his strategy was to write on a topic which is scientific/objective in nature and then cover as many dimensions of the topic as possible. Also, Mohammad Sana Akhtar tried to relate the topic with current happenings of the country and the world. During the exam, he used mind map technique to generate as many ideas about the topic as possible.

Scoring good marks in the interview is all about how well you present yourself, clarity of questions asked is a must. If you understand what has been asked, you would surely be able to answer it easily. There are two types of interviews conducted by the UPSC panel, one is the factual and the other one is opinion-based. Opinion based is much easier to crack and scoring as one can put forward one’s own opinion whereas in the factual one needs to talk about the facts which is tougher as compared to the opinion based interview.

Interview in Mohammad Sana Akhtar view is usually a reflection of oneself. To perform well, one should know about: