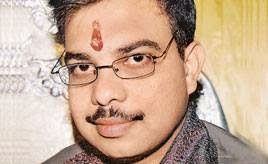 As a personal security officer, he has provided shield to many an IPS officers. Now, with more than seven years of service still left, havildar Bhagwan Singh, an instructor in BMP-5 in Patna, hopes to stand guard to his son Sujit Kumar Singh, who has cracked the civil services this year.

Hailing from Nad, a township in Rohtas, where matriculates are worshipped, Sujit (25) has, in a way,
broken the family tradition. Unlike his father, who is a matriculate, mother Suryakanti Devi and sister Binu, both non-matric, Sujit not only did graduation (from Hindu College, New Delhi), but also leapfrogged into the IPS (all-India rank 132) — a position his uncles would envy.

While one of the uncles, Ram Dayal Singh, is an assistant sub-inspector of police (posted in Konch, Gaya), Rajeshwar Singh is a sub-inspector in the BSF (in Tripura), Uday Singh another of Sujit’s uncle is an airman in the Indian Air Force while yet another uncle, Ashok Singh, has retired as an Army havildar.

an ebullient Singh, whose son is expected to arrive in Patna from the national capital on Wednesday, said: “My son has been very different right from his childhood. He was a bookworm, who used to study for 16-18 hours a day. Even during the festival of Holi, when all children would play with colours, Sujit sat with his best companion — books.”

Singh added, “Sujit was never a second divisioner. Having done his matriculation from Maner High School and intermediate from Patna College, he went to Hindu College, New Delhi, for graduation in History and Geography. Such was the stigma of Bihar that the college authorities did not believe his markssheet. Sent back thrice for re-confirmation, it was only after the intervention of B Bhamati, the then Director, Education Department, that the principal of Hindu College agreed to take him in. Even after admission there, his classmates used to look down upon Sujit because of his being a Bihari. “But my son silenced the doubting Thomases with his results. He topped the university in all the three years.”

That was just the prologue of a success story, as Sujit, belonging to a family of cops, made it to the IPS in his second attempt.

Sujit, on the phone from Delhi, gushed: “It’s a dream come true. I feel on top of the world. My father and I had nurtured the hope that one day I would become an IPS officer. I attribute my success to my parents and uncles.”

Kuldeep Dwivedi has secured the All India Rank 242 in the Civil Services Exams conducted by UPSC, paving the way for his future as an...
Read more
Toppers Talk

Awe-inspiring: From Waiter to an IAS Officer (Top Rated Story)

Inspired by the spider, the Scottish king Robert the Bruce told his men, 'If you don't succeed the first time, try, try and try...
Read more
Toppers Talk

Both Brother and Sister of Panipat Cleared the UPSC Exam

It was a special day in the Duhan household where the sister-brother duo Shalini and Alekh cleared the UPSC exam. The duo hail from Shahrmalpur village...
Read more
Toppers Talk