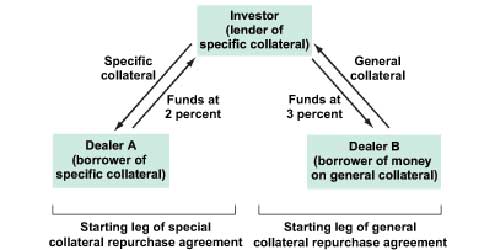 Repurchase Agreements (Repo) is a money market instrument, which enables co-lateralised short term borrowing and lending through sale/purchase operations in debt instruments.
Under a repo transaction, a holder of securities sells them to an investor with an agreement to repurchase at a predetermined date and rate. In the case of a repo, the forward clean price of the bond is set in advance at a level which is different from the spot clean price by adjusting the difference between repo interest and coupon earned on the security.
In the money market, this transaction is nothing but co-lateralised lending as the inflow of cash from the transaction can be used to meet temporary liquidity requirement in the short term money market at comparable cost.
A Repurchase Agreements (Repo) is also sometimes called a ready forward transaction as it is a means of funding by selling a security held on a spot (ready) basis and repurchasing the same on a forward basis.
When an entity sells a security to another entity on repurchase agreement basis and simultaneously purchases some other security from the same entity on resale basis it is called a double ready forward transaction.
Read Also: What is repo rate?
Reverse Repo
A reverse repo is the mirror image of a repo. For, in a reverse repo, securities are acquired with the simultaneous commitment to resell. Hence, whether a transaction is a repo or a reverse repo is determined only in term of who initiated the first leg the transaction. When the reverse repurchase transaction matures, the counter-party returns the security to the entity concerned and receives its cash along with the profit spread. One factor which encourages an organisation to enter into reverse repo is that it earns some extra income on its otherwise idle cash.
Don’t Miss: Current account convertibility Vs Capital account convertibility
Repurchase Agreements (Repo) Period
Repurchase Agreements (Repo) period could be overnight, term, open or flexible. Overnight reports last only one day. If the period is fixed and agreed in advance it is a term repo where either party may call for the repo to be terminated at any time although requiring one or two days’ notice. Though there is no restriction on the maximum period for which repo can be undertaken generally term repo are for an average period of one week. In an open repo, there is no such fixed maturity period and the interest rate would change from day to day depending on the money market conditions.
Types of Repos
Broadly, there are four types of Repurchase Agreements (Repo) available in the international market when classified with regard to maturity of underlying securities, pricing, term of repo etc. They comprise buy-sell back repo, classic repo, bond borrowing and lending and tripartite repo.
This type of arrangement minimises credit risk and can be utilized when dealing with clients with low credit rating.
Also, Read:
International Financial Reporting Standards (IFRS)
Bankruptcy Bill Cleared by Joint Parliament Standing Committee
Government to Appoint New Governor of Reserve Bank of India (RBI)