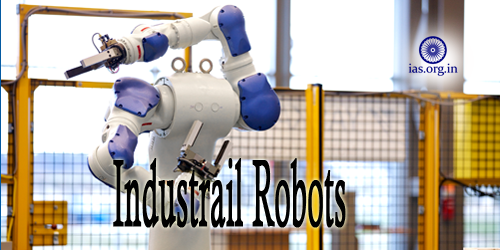 It may sound exaggerating, but is a fact that there are over a million industrial robots that can be found working for us in medical, auto, manufacturing and space industries.

Robots, re-programmable in many applications, are programmed once, and then, they (can) repeat that exact same task for years. In fact, Robots can work for 24 hours a day for years. In comparison with manual industrial labour or fixed automation, industrial robots proffer numerous advantages.

Industrial robots are faster, more efficient and can function smoothly robot was a crane like device that was capable of stacking wooden blocks in a programmed pattern.

Today industrial robots, which have come a long way since they first appeared on the scene, are not only highly sophisticated but intelligent too.

These first generation robots, large and heavy machines, are used for work such as welding car bodies, handling hot pieces of metal, spray painting and loading. They usually have a special instrument attached to the end of their arms; this special instrument can be a gripper or welding gun. These machines can make precise motions many times at high speed for a long time. These first generation robots have widespread industrial use today. These machines have the capacity to work in group in their functions are synchronized.

Some robots are particularly designed for ‘pick and space operation’, a phrase that is used most frequently with reference to factories. These robots are used for the purpose of machine loading and uploading, palletizing and general material handling.

‘Pick and place operation is a process in which an object is needed to be picked up from a specific position, and placed in another particular position.

An example can be sought in a soft drink factory where robots pick drink cartoons from the end of a conveyor belt and place them into boxes, or for loading and unloading.

High-speed pick and place robots carry, with the pinpoint accuracy, products from one location to another, and are undoubtedly many times more efficient than human beings in performing such tasks. And, above all, at the same time they assist in curtailing production costs also.

Robots performing point- to- point operations, like the pick and place robots, move from one point to the other in order to obtain the desired accuracy. The Robot, with point-to-point control, records the point where it picks up a part and the point where it leaves that part. The best path between these two points is determined by the robot.

This system of point- to- point operation is generally used when the path between the two points does not matter or when the same task has to be repeated continuously. These systems work very efficiently in loading and unloading applications.

Robots which select, position, fit and assemble parts and adjust the finished product according to specifications, are called assembly robots. Such robots are ideal for use in the assembly line of factories.

In order to select the correct path an assembly robot uses a TV camera to apprehend a picture of the different components, and compares it with the picture already stored in its computer’s memory. It, afterwards, selects the part that matches the picture in its memory.

In the world of manufacturing, assembly robots have helped in expanding production capacity they can be used for different purposes and applications and can save workers from tedious and boring jobs, as well as save on costs by reducing the rate human error.

The first robot, called the Unimate, which made its debut in the 1960s was a robot working in the automobile industry. Robots, since then, have been playing an increasingly important role in the manufacturing of automobiles. As a car is built, it goes along a production line stopping at different junctions for different kinds or jobs to be done.

Robots started to perform, by the 1980s, many of such jobs like wielding, along with painting and other assembly applications. Manufacturers, to their extreme satisfaction and delight, found out that robots were cost effective, efficient and safe.

A delta robot, a type of industrial robots invented in the early 1980s by a research team led by professor Reymond Clavel at the Ecole Polytechnique Federale de Lausanne, Switzerland, consists of three arms connected to universal joints at base.

The purpose of this type of robot was to manipulate light and small objects at a very high speed. In fact, Delta robots have popular usage in picking and packaging in executing up to 300 picks per minute. The packaging industry, medical and pharmaceutical industry take most advantage of the high speed delta robots.

Delta robots are also used for surgery, high precision assembly operations for electronic parts. Moreover, with the help of delta robots tasks such as in solar cell assembly can be completed quickly and perfectly every time.

Advantages of using Robots in Industries

Since robots can work, without having a break, for 24 hours a day, they certainly can improve productivity in industry quite dramatically. As robots work much faster, they can be helpful in producing more units. At the same time, costs are cut for once the company pays for the robot, it does not have to pay a salary to workers to do the same job. It requires a maintenance cost only in the context of robots.

The use of robots, above all things, ensures better quality products because they are more precise than human beings and they do not get tired and make mistakes. It has been accepted across the world that it is safer to use robots in place of people for jobs like unloading of hot furnaces, or handling of radioactive chemicals. Last but not least, robots are more obedient than human beings who certainly are not going to strike or argue for bonus or salary.