My account
Get into your account.
LoginRegister
Plans
Home Random The Skeletal System: Guards of the Body 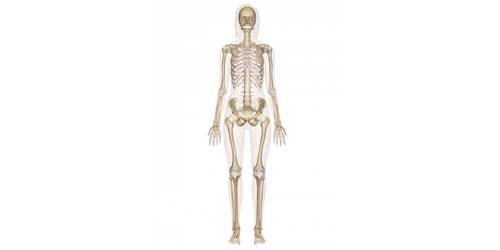 The Skeletal System consists of the bones of the body, their connecting cartilage and ligaments.

Each and every person has a skeleton formed of many bones. An adult person has 206 bones in his/her body; a human baby is born with around 300 bones, but by adulthood some bones fuse together and an adult person ends up with 206 bones.

In the Skeleton System of human body each bone has a function; some bones are there to provide protection to softer, more weak parts of the body: the skull protects the brain, and the two bony sockets in front of the skull guard the eyes. The rib cage shields our lungs and heart, and the spinal column saves the delicate spinal cord.

Other bones, like the bones of legs and arms, help human beings in moving around by arranging support for the muscles. If a person does not get enough calcium, the body will take it from the bones as they store calcium; however it makes the bones weaker, so it is advised to drink milk to build strong bones. It is the bone-marrow that produces red and white blood cells.

Must Read: The Circulatory System: Carrier of Life

Numbers of Bones in the Human Body

Bones of Human beings develop continually, from birth till the mid 20s. The smallest bone in the human body, that is only 2.8 millimetres long is located in the muddle of the ear, while the longest bone is the high bone that is called the Femur.

Maximum of number of bone in our body are located in the hand, finger and wrist: there are fifty four bones. The skull is made up of twenty nine bones. The circular part of the skull, also known as cranium, comprises of eight bones known as vertebrae.

The bones of human beings are regularly being worn down and re-made, to the extent that every 7 years, humans essentially have a new bone.

Structure of a Bone

Nearly 70 percent of our bones are made up of hard minerals like Calcium. The outer layer of the bone, that is hard, smooth and solid, gives shape to it. There remains inside this outer layer, a porous, spongy bone material known as the trabecular, or cancellous bone.

As this part is lighter, making the bone itself lighter, it becomes easier for us to move around; and not only this, it also permits space for blood vessels and makes our bones a bit more bendable so that don’t break too easily. At its centre the bones there remains a substance called bone marrow.

The shape of the long bones is generally cylindrical. Short bones, as those of wrist and ankle are made u of thick shaft of elastic material inside a thin covering of hard bone material.

Bones are really so unique in their lightness and strength that very few man-made substances can claim to come close to them in these qualities.

The Cartilage: holding the bones together

Cartilage, a spongy, flexible connective tissue that holds together the bones in our bodies, is found in the joints between the bones, the ear, the nose, the ribcage, the elbow, the knee, the ankle and the bronchial tubes. It is its springy qualities that make it a good shock absorber. Cartilage, unlike bones, does not have any blood vessels.

Cartilage, along with fluid, helps bones to rub against each other smoothly and perish. Cartilage, the connective tissue, is not as hard as bone, a perfect halfway point, and it is also less flexible than muscle.

Therefore, in human body, cartilage is found in places where we need assistance and structure, but a bit of flexibility too. This consists of our joints, ears and nose as well as in the vertebrate in the spinal Colum.

Ligaments are thick cords of tough stringy tissue that keep bones together at their joints. Normally one of the bones contains a tiny hollow containing a lubricating fluid that assists the bones in moving smoothly over one another, in a way as oil helps the parts of any engine move over one another.

Also Read: BLOOD AND ITS CIRCULATION