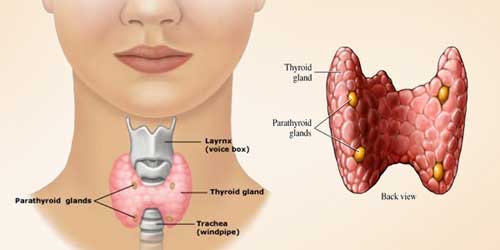 The thyroid gland undoubtedly stands to be one of the most important glands of the human endocrine system. It secretes hormones that regulate metabolism and other important functions of the body and hence initiates growth and development of the same.

The thyroid gland produces two important hormones, namely, the thyroxine (T4) and the triiodothyronine (T3). Of these two hormones, the T3 hormone is considered to be more crucial in maintaining the metabolism and other body functions. When released in the systems a large part of the T4 hormone is converted into the T3 hormone, which is a normal function of the system.

Must Read: Hypertension or High BP

Types and Causes of Thyroid Diseases

The thyroid hormones play an important part in metabolism and growth it is necessary that an optimal amount of the hormones circulate within the human system for proper functioning and nourishment. But if there is a slight increase or decrease in the levels of the hormones in the system it could lead to a medical condition that might need attention.

The thyroid gland also produces another hormone called the calcitonin. This hormone regulates calcium by lowering calcium levels in the blood. Excess of calcium could again give rise to another condition called hypercalcemia.

This condition is denoted by a dip in the thyroid hormones in the blood. It happens if one has an underactive thyroid or the glands that control the thyroid malfunctions, though there are other causes also that can lead to this condition.

Some of the causes that could lead to a low level of thyroid hormone in the system and give rise to hypothyroidism are:

Have a Look at: Cancer : A Fatal Disease in India

In this condition there is an overdrive of the thyroid hormone in the blood due to an overactive thyroid gland that secretes the hormones in abundance. Some of the common causes that lead to hyperthyroidism are:

You May Also Read: Chickenpox and Shingles – Diseases Caused by Virus Varicella zoster

In this condition thyroid disease occurs due to the structural changes in the gland like an enlargement or nodules appearing on the gland. There can be benign cysts developed or cancerous ones in the form of nodules. Enlargement of the thyroid gland is often termed as goiter. Goiter can at times be unnoticeable and at other times, it can lead to abnormal enlargement that might need surgical removal of the organ.

Symptoms of a thyroid malfunction

Some of the common symptoms of hypothyroidism are:

Don’t Miss: Signs that you have cancer

Some of the common symptoms of hyperthyroidism are:

The Skeletal System: Guards of the Body