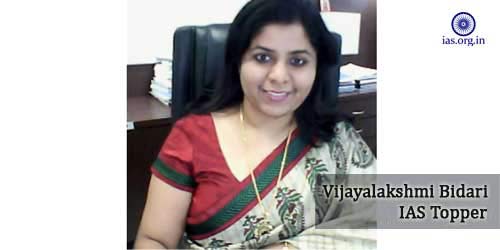 Vijayalakshmi Bidari secured All India first Rank in the Civil Services Examination and became IAS Topper for the year 2001 . Her dedication to work, and the support from her family, instilled her the confidence to learn lot of things in her career.

There is a saying in which Vijayalakshmi believes “Shoot for the moon, and even if you fail you will land among the stars.” It’s always important to keep high goals for ourselves in our personal and professional lives, so that we can bring out the best possible in ourselves.

Vijayalakshmi Bidari’s family has a distinction of having five civil servants from a single family of six members. Her husband Mallikarjuna Prasanna, an IPS officer in Mumbai. Vijayalakshmi’s father Shankar Mahadev Bidari,  was also an Indian Police Service officer of 1978 batch. Her mother Umadevi, is a doctor by profession, is the only non-IAS and non-IPS person in the family. Her brother Vijayendra Bidari, an IPS officer. His wife Rohini P Bhajibhakare, too is an IAS officer.

Due to her father’s frequent transfers in ten years of schooling were spread over eleven places. Her schooling was at small places, in State board and mostly Missionary schools. After her class tenth she choose science for her secondary schooling and opted for Physics, Chemistry, Maths and Biology.

After her 12th she got a merit seat in the RV College of Engineering. She chose Computer Science and proved to be independent as she had two jobs in hand even before leaving college. She went through campus selections in BFL Software as a project trainee, with HPCL Calcutta as a management trainee, and a dozen other companies. She finished her Engineering in March 1999.

In her first attempt, she prepared very well and secured 107th rank and was selected for the Indian Customs and Central Excise Service, missing the Indian Administrative Service by 35 marks.

Again she went ahead preparing for second attempt and had topped in the list of successful candidates. It was a little tough to motivate herself because she was already in a service. At this point her friends and her mother made sure that she puts a lot of effort, telling her that “she deserved the best and should aim for the best”.

Vijayalakshmi Bidari undertook her studies systematically by reading topics one by one; making notes, revising, trying test papers within the allotted time and getting them corrected and trying to improve on her mistakes. She worked eight hours a day to achieve her goal. Consistent hard work has yielded the results she wanted.