My account
Get into your account.
LoginRegister
Plans
Home Learn Geography Jupiter; The Largest Planet of Solar System 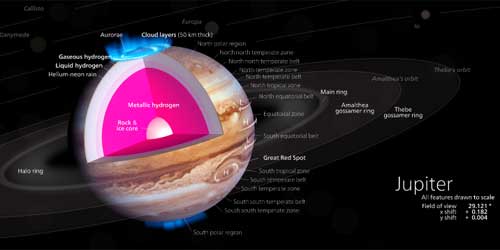 On 8th March 2018, after the sunset to almost whole night in India, people witnessed geographical phenomena called Apposition of Jupiter after 13 years. This event occurs when Earth comes between Jupiter and the Sun almost exactly on a line from one another.

Jupiter is the largest planet in the Solar System. It is the fifth planet from the Sun. it is a gas giant planet, along with Saturn. Jupiter has a mass of one-thousandth that of the Sun but is two and a half times massive them all the other planets in the entire Solar System. Since it is made primarily of gasses, it is known as a “gas giant”.

Jupiter has a cluster of at least 67 moons, the largest number of natural satellites around any of the planets, in orbit around it. Amongst these, the four largest moons of Jupiter are Ganymede, Callisto, Io and Europa. Since they were discovered by Galileo Galilei, they are known as the Galilean moons.

Also Read: Solar Eclipse – Everything You Need to Know

Ganymede, discovered in 1610, is Jupiter’s largest Moon. It is also the largest Moon in the Solar System. It is larger than the planet Mercury. If it were not orbiting as Jupiter’s Moon, it could have been considered a dwarf planet. It is named after the mythical Greek son of a king, who was carried to the sky by Zeus pretending to be an eagle.

Callisto is the second largest Moon of Jupiter and is nearly the size of Mercury. It was also discovered in 1610. It is a half-rocky, half- icy Moon. The surface of this Moon contains rocky particles carbon dioxide, hydrocarbon compounds, water ice and silicate dust.

Europa, discovered in 1610, is the smallest of Jupiter’s Galilean Moons. It is named after a woman in Greek mythology, who was daughter of a king. She was believed to be one of Zeus’ many lovers and was made the queen of Crete. It is nearly the same size as Earth’s Moon. Its orbit is nearly circular.

The Sightings of Jupiter was first recorded by the ancient Babylonians around 7th or 8th century BC. It is named after the king of Roman gods. To Greeks, it represented the god of thunder – Zeus. To the Mesopotamians it represented the god Marduk and the patron of the city of Babylon. Germanic tribes saw this planet as Donar or Thor.

Jupiter has a thin ring system:

Whose rings are made up mainly of dust particles ejected from some of Jupiter’s smaller worlds during impacts from incoming comets and asteroids. It has unique cloud features as its upper atmosphere is divided into cloud belts and zones. They are composed primarily of ammonia crystals, sulfur, and mixtures of the two compounds.

Jupiter is the fourth brightest object in the solar system and is one of the five planets visible to the naked eye from Earth. Only the Sun, Moon and Venus are brighter than Jupiter.

Jupiter’s interior is made of rock, metal, and hydrogen compounds. The massive atmosphere is composed primarily of hydrogen. There are layers of compressed hydrogen gas, liquid metallic hydrogen, and a core of ice, rock, and metals below its atmosphere.

The Great Red Spot is a huge storm on Jupiter that has raged for at least 350 years. It is so massive that it can envelop three Earth inside it.

Till date eight spacecraft have visited it: Pioneer 10 and 11, Voyager 1 and 2, Galileo, Cassini, Ulysses, and New Horizons missions. The Juno mission is in its way and will reach to Jupiter in July 2016.

Jupiter orbits the Sun once every 11.8 Earth years. From Earth, it appears to move slowly in the sky. It takes months to more from one constellation to another.

It has the shortest day among all the planets. It rotates on its axis once every 9 hours and 55 minutes. The rapid rotation, while giving it an oblate shape, flattens the planet slightly.