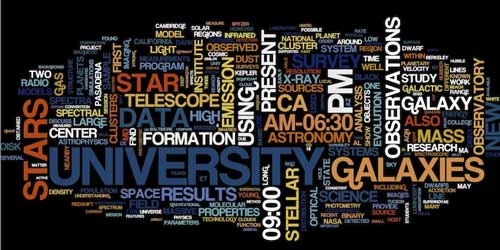 Asteroid – An asteroid is a celestial body made of rock and metal that orbits the Sun. Asteroids can vary in size from a few feet across to hundreds of miles.

Asteroid belt – An area between the orbits of Mars and Jupiter where a million asteroids orbit the Sun.

Astronaut – A person who is specially trained to travel into outer space.

Astronomy – The branch of science that studies outer space, celestial bodies, and the universe.

Atmosphere – An envelope of gases that surround a planet.

Black hole – An area in space with gravity so intense even light cannot escape its pull. Black holes are formed when massive stars collapse.

Celestial body – A natural object that exists outside the Earth’s atmosphere. Examples include stars, planets, asteroids, comets, and meteoroids.

Constellation – A grouping of stars that form a pattern in the sky when viewed from Earth.

Coma – The area of gases and dust that form around a comet as it passes by the Sun.

Comet – A celestial body made of ice and rock that orbits the Sun. When a comet nears the Sun a coma and tail of gases and dust can be seen.

Cosmology – The branch of science that studies the origin and nature of the universe.

Dwarf planet – A celestial body that is large enough to become rounded from its own gravity, but has not cleared its orbital region of other objects.

Galaxy – A system consisting of a large number of stars bound together by gravity.

Gas giant – A large planet that is not composed mostly of rock, but primarily of gas. There are four gas giants in the Solar System including Jupiter, Saturn, Uranus, and Neptune.

Kuiper belt – A large ring of millions of icy objects that exists outside the orbit of Neptune.

Light year – A measure of length that equals the distance light travels one year in a vacuum. It is about 5.8 trillion miles.

Meteor – A meteoroid that has entered the Earth’s atmosphere is called a meteor.

Meteorite – A meteor becomes a meteorite when it reaches the ground.

Meteoroid – A small rocky object that orbits the Sun that has broken off from a comet or asteroid.

Milky Way – The galaxy that contains the Solar System.

Nebula – A large cloud of dust in space. The dust in nebulae often forms stars and planets.

Nuclear fusion – The process by which two or more atoms are joined together to form a larger atom. This process occurs inside stars and produces huge amounts of energy.

Oort cloud – A band of billions of icy objects that exists at the edge of the Solar System.

Orbit – The path a celestial object takes around a star or planet.

Planet – A large celestial object that has become rounded due to its gravity and has cleared is a nearby region of other smaller objects. Planets in the solar system include Mercury, Venus, Earth, Mars, Jupiter, Saturn, Uranus, and Neptune.

Satellite – A natural or artificial object that is in orbit around a planet.

Solar System – The Solar System consists of the Sun and all the objects that orbit around it including the planets, asteroids, comets, and other objects.

Solar Wind – A stream of charged particles that is constantly flowing from the Sun.

Star – A giant ball of hot gas and plasma that generates huge amounts of energy through nuclear fusion.

Sunspot – A dark area on the Sun caused by cooling from electromagnetic activity within the Sun.

Supernova – A huge explosion caused when a star collapses on itself.

Telescope – An instrument used to view objects in outer space.

Universe – The universe is everything that exists including the stars, planets, matter, energy and time.