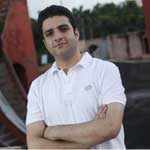 “So here I am….happy at the decision. I have already given IAS as my first choice and Jammu and Kashmir as my cadre preference. I believe that there is a lot of scope for me to do something for my people in the state,” says Athar Aamir-ul-Shafi Khan.

Working for the grassroots and doing something for the society was the prime reason behind Athar Aamir-ul-Shafi Khan to write Civil Service Exams. “Civil services give us the opportunity to work very closely for the people. Civil services has a distinction that you can not only work for the grassroots and the people but also with them,” Athar Aamir-ul-Shafi Khan said.

Athar Aamir-ul-Shafi Khan belongs to Devipora-Mattan village in Anantnag district, 60 km south of Srinagar. He is a son of a Mohammed Shafi Khan, teaches economics at Government Girls Higher Secondary School Anantnag, Athar Aamir-ul-Shafi Khan had an inclination for higher studies from his childhood. Such was his brilliance that he was awarded by the late president APJ Abdul Kalam as young scientist when he was in class 10. And that brilliance continued through his youth when he cracked prestigious IIT.

“I am a proud father today. The best moment in a father’s life is when he is known by his children and today my son has given me this happiness. His hard work has paid rich dividends. Allah has listened to our prayers, nothing is possible with the will of Allah. He was a brilliant student from the childhood. He was awarded best young scientist award when he had participated in Science Congress. He later cracked IIT and then UPSC. But now he has earned second rank,” an excited father said”.

Athar Aamir-ul-Shafi Khan did his schooling from Tyndale Biscoe School in Srinagar. He had made it to the IIT but did not join as he was offered a B-Tech course when he wanted to pursue BE. This acted as a catalyst for him to appear for the Civil Services and he qualified last year. Athar Aamir-ul-Shafi Khan completed his Engineering from Indian Institute of Technology (IIT) in Mandi, Himachal Pradesh in July 2014.

Despite being the science student, Athar Aamir-ul-Shafi Khan chose Philosophy as his optional subject for Civil Services Exam. Last time also his optional subject was Philosophy and he continued with this subject in his second attempt too. In his first attempt he started studying seven months before the Preliminary Exams. And by the grace of Allah and blessing of his parents he cracked UPSC Exam.

Athar Aamir-ul-Shafi Khan had appeared previous year but his ranking was down (560) and, therefore, he was offered Indian Railway Traffic Service (IRTS). He joined but IAS was his first love and he planned to do both – join the training and appear again. The 23-year-old Athar Aamir-ul-Shafi Khan scored second rank in his second attempt at the prestigious Civil Services Examinations. Delhi’s Tina Dabi topped the IAS exams 2015 by securing first position.

Athar Aamir-ul-Shafi Khan did not have a great exposure to coaching classes but he was confident that he can do it. Extensive reading and complete dedication made him realise his dream. “My grandfather has been biggest motivation for me, his hard work, passion and enthusiasm have been a great source of motivation for me,” says Athar Aamir-ul-Shafi Khan.

Athar Aamir-ul-Shafi Khan advised Kashmiri youth to “come out of their shell” and prepare hard, rather than “crib” about the difficulties they face. The Civil Service allows you a wide area to work, and makes you responsible.