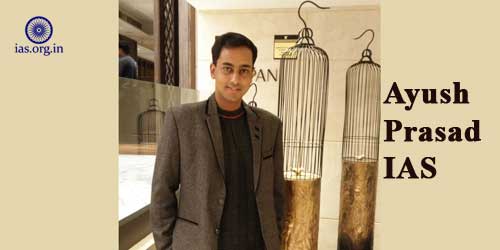 Ayush Prasad has proved that there is no short – cut to success. Ayush’s strong determination led him to become an IAS officer. Becoming an IAS offficer was the result of his, true struggle and hardwork. Ayush Prasad has secured the AIR 24th in the Civil Services Examination.

Asked if he always wanted to take up Civil Services given the long list of officers in his family, Ayush Prasad said, “I was a research engineer and wanted to create new technologies, but when I worked with poor rural women in Andhra Pradesh and Uttar Pradesh I realized that there a lot of social problems in this country and I felt my life would have a greater meaning if I worked with such people rather than trying to create technologies. I believe civil service has wide impact on people’s lives, because the way our country is organized, public institutions play a very important role and my main aim is to somehow reduce poverty in this country.”

Interestingly, four generations of Ayush’s family, including Ayush Prasad, have been into civil services in a row. Apart from his IPS father, his great grandfather (ICS during British rule) and grandfather (IAS) too had been Civil Servants, making the family perhaps the only one to achieve this rare feat. His father A M Prasad (IPS) is currently the ADGP in Karnataka State Intelligence Department, while his mother Dr Amita Prasad (IAS), is the Joint Secretary in the Ministry of Water Resources, Government of India, and heads the clean Ganga mission. His younger sister Anusha is pursuing Law at Christ University, Bengaluru.

Ayush Prasad did his early schooling at St Aloysius School, Urwa, which he says gave a perfect start to his education. Due to frequent transfers of his parents, he ended up studying in 12 schools across the state. Ayush Prasad  completed his engineering from Manipal Institute of Technology in 2010.

Ayush had earlier worked with the biggest company in India- TATA Consultancy Services (TCS) Innovation Labs where he was part of a team that developed four patents, including mobile wallets. He has also been part of Young India Fellowship (YIF) where he won full scholarship of Rs 12 lac and completed one-year programme in leadership and liberal arts from the University of Pennsylvania. He has also written for various media including All India Radio. Ayush also worked with the the largest Financial Services Organisation – The State Bank of India Group as a Deputy Manager. He has also worked as intern for National Rural Livelihoods Mission at Karnur in Andhra Pradesh and Rae Bareilly in UP.

This was Ayush Prasad second attempt at UPSC.

Ayush Prasad study plan was basically divided into 3-4 phases. In the first phase he tried to develop an understanding of the syllabus and collect as much material as possible. In the second phase Ayush Prasad studied the syllabus systematically and tried to cover each and every topic one by one. In the third phase he worked on presenting the knowledge he had from various sources, so Ayush Prasad developed proper notes on various topics which was very important, and the next phase was about writing answers and structuring the information, his answers were like anyone would write a paper, with abstract introduction, background, supporting information and conclusion.

An elated Ayush Prasad said, “I would like to credit this success most importantly to my parents for being a very strong pillar of support and source of inspiration for me, especially my father for giving me proper guidance particularly on how to structure answers and how to study systematically. My father really helped me. I have not taken any coaching, so it was my parents alone and I credit my success to them”.

“It is by god’s grace that I could get this rank and it feels a little overwhelming because it was beyond my own expectactions. Though I have got such ranks in the past in all-India exams, UPSC civil services is by far the toughest exam, so this has a very special place and I feel very grateful to god that I could achieve this”.