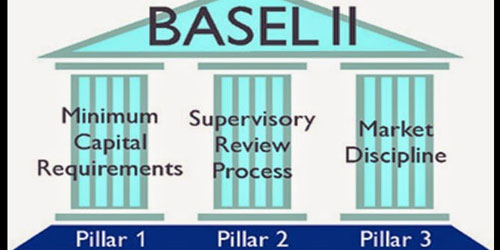 Basel I is the round of deliberations by central bankers from around the world, and in 1988, the Basel Committee on Banking Supervision (BCBS) in Basel, Switzerland, published a set of minimum capital requirements for banks. This is also known as the 1988 Basel Accord and was enforced by law in the Group of Ten (G-10) countries in 1992.

Basel I, that is, 1988, Basel Accord, is primarily focused on credit risk and appropriate risk-weighting of assets. Banks with an international presence are required to hold capital equal to 8% of their risk-weighted assets (RWA).

Basel II is the second of the Basel Accords, which are recommendations on banking laws and regulations issued by the Basel Committee on Banking Supervision.

Basel II, initially published in June 2004, was intended to create an international standard for banking regulators to control how much capital banks need to put aside to guard against the types of financial and operational risks banks face. One focus was to maintain sufficient consistency of regulations so that this does not become a source of competitive inequality amongst internationally active banks.

Basel II attempted to accomplish this by setting up risk and capital management requirements designed to ensure that a bank has adequate capital for the risk the bank exposes itself to through its lending and investment practices.

Basel III is a global, voluntary regulatory standard on bank capital adequacy, stress testing, and market liquidity risk by the Basel Committee on Banking Supervision. The third installment of the Basel Accords was developed in response to the deficiencies in financial regulation revealed by the late-2000s financial crisis. Basel III was supposed to strengthen bank capital requirements by increasing bank liquidity and decreasing bank leverage.

Basel III is primarily related to the risks for the banks of a run on the bank by requiring differing levels of reserves for different forms of bank deposits and other borrowings.