My account
Get into your account.
LoginRegister
Plans
Home Stories UPSC Board Interview of Paramvir Singh IAS, AIR-29 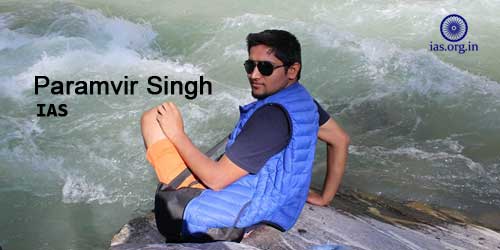 Paramvir Singh is the second topper of Panchkula, who has been ranked 29th in the most prestigious position of Indian Administrative Services (IAS). Rishav’s strong determination led him to become an IAS officer. Becoming an IAS offficer was the result of his, true struggle and hardwork. He is a practising lawyer at the Punjab and Haryana high court and had passed out from National Law School, Delhi.

Indian Administrative Service can serve people better being a bureaucrat. Paramvir Singh would like to contribute to best of his abilities towards Public Service. He want to bring merit and honesty to the forefront.

Paramvir Singh comes from a quintessential middle class family from Panchkula, Haryana, which moved to the city only twenty years ago. His father Satpal Singh, was a senior lawyer in the High Court, and was always very concerned about his education. His father had expired in 2012. His mother Kamlesh is a housewife. His father was the one who prompted Paramvir Singh to choose a career in law after school, even though he always had his eyes set on Engineering, and Paramvir Singh finally ended up by joining National Law University, Delhi.

Paramvir Singh completed his schooling from KBDAV School. He then graduated in Law from National Delhi Law University (DU) in 2013 and has also topped the Law entrance exam at DU. His schooling was average, with limited exposure, and Paramvir Singh had to really slog through the initial few months of college life. However, those few months of hard work and the resulting confidence, enabled him to aspire for the most coveted government job available.

Paramvir Singh practices as an advocate in the Punjab and Haryana high court with his uncle. His father wanted Paramvir Singh to join Civil Services and he have fulfilled his dream. It was his dream also to become an IAS officer. He is happy to reach this place today. Regular studies are a must to clear such an exam. He used to give about five hours daily for studies.

Naturally, Paramvir Singh was more confident with Law as his optional subject, having studied it during law school, and he believe that this familiarity with the subject made the whole preparation process much easier as compared to those candidates who chose a totally new subject for their optional.

Having cleared the Union Public Service Commission Civil Services Examination in 2013 as well, when he got rank 619, Paramvir Singh was selected to the Internal Revenue Service (IRS). But Paramvir had bigger plans and was eyeing the Indian Administration Services. He did not join the IRS and continued with law.

He decided to appear again for this exam and in the year 2014, he was successfully ranked AIR 29 and he is currently undergoing his training period at the Lal Bahadur Shastri National Academy of Administration, Mussoorie. He will be soon joining the Punjab Cadre after the completion of the training.

Chairperson: So you are practicing in high court. Tell me what Article 32 does.
Paramvir Singh: It provides a constitutional guarantee for any citizen to approach the Supreme Court directly in case of violation of fundamental rights.

Chairperson: If posted as part of the IAS in Haryana, what would you do to stop sex determination?
Paramvir Singh: I would firstly enforce the PNDT Act stringently by stopping all illegal sex determination clinics. And secondly, I would try to convince the villagers including the elderly that there is no benefit in the practice and that the government has introduced various schemes by which the girl child is not a burden at all.

Chairperson: What do you think, personally have you seen any improvement in the dowry situation?
Paramvir Singh: Yes, ma’am, as the people have moved from rural to urban areas and have become exposed to progressive ideas, the practice of dowry has waned.

Chairperson: Okay. Also, brides are being purchased from other states. What do you think should be done?
Paramvir Singh: Yes, ma’am, brides are bought from other states such as UP and Nepal… as the practice of sex determination and foeticide reduces, the situation will improve and men will not buy brides for themselves.

Chairperson: What was the UNDP project which you worked for? Was it through the university or independently?
Paramvir Singh: It was part of a research project being assigned to the University.

Chairperson: What did you do?
Paramvir Singh: We worked on the implementation of the Building and Construction Workers Act and helped in getting them benefits provided under the Act.

Chairperson: What do you think India can learn from the Arab Spring?
Paramvir Singh: I think the Arab Spring showed that there is a yearning for democracy in every society in the modern world, and that only democracy can fulfill the needs of all sections of society, and so India, even though has built itself as a liberal state, is not perfect and should try to achieve an inclusive democracy with equitable distribution of wealth and welfare of all sections. Only then can it sustain.

M2: Tell me, as a lawyer, how can the police be controlled and made accountable through law?
Paramvir Singh: Sir, there are already many provisions in the CrPC, etc. to make it accountable such as the one where the accused has to be produced before Magistrate within 24 hours of arrest.

M2: But what happens practically?
Paramvir Singh: Sir, I have seen that the entries in the register are falsely made. For example, a juvenile was arrested earlier, but an entry was made only just before his production.

M2: Right, so what causes so much delay in trials and what should be done?
Paramvir Singh: Sir, delay is caused primarily due to the fault of the court, as it is primarily responsible for the conduct of case and there are provisions whereby it can deny unnecessary adjournments, etc. But some fault also lies with the lawyers who abuse the system

M2: But judges are few whereas lawyers are many, can they withstand the pressure? What have you seen practically?
Paramvir Singh: Sir, yes, that is the case, but I have mainly worked in the High Court.

M2: Okay. Can a poor man, for example, a rickshaw puller get bail in the court, and if not, then why?
Paramvir Singh: Sir, the judges at lower levels play safe and leave it to the judges higher up to grant bail. There are various provisions for their protection such as where once a person has served the half of his maximum sentence, he has to be compulsorily granted bail.

M2: But does the High Court grant bail?
Paramvir Singh: Yes sir, they do.

M2: But can a poor man approach them?
Paramvir Singh: Sir, there are legal aid clinics in place to help in case of need.

M2: Do they work?
Paramvir Singh: Sometimes, but not very efficiently, because the lawyers there are not very competent.

M2: Do you think the legal system needs a lot of reform?
Paramvir Singh: Absolutely, sir.

Member 3: So you are a practising lawyer. Are you independent, or are you working with somebody?
Paramvir Singh: I am working with a cousin of mine.

M3: Any important case?
Paramvir Singh: Yes – I challenged the appointment of Additional Advocate Generals and other law officers of state, which is generally done on totally arbitrary considerations.

M3: And you did it independently?
Paramvir Singh: Yes, sir.

M4: What is pro bono?
Paramvir Singh: When a lawyer takes up a case for free.

M4: So what do you think about making pro bono cases a part of CSR?
Paramvir Singh: Ma’am, that would be a tremendous idea and it can be made as one of the permitted activities under CSR. But there is a slight problem, as CSR is mandatory only for companies with turnover exceeding Rs. 500 crores.It would at the most cover a few firms in India, as the majority of them are not having turnover above 500 crores.

M4: Can Maggi sue for defamation if it is acquitted tomorrow, for the loss of reputation the ban has caused?
Paramvir Singh: No, legally speaking, no, because it is during the process of law that the loss has occurred, and all preliminary findings in many states have found it in violation of law and thus public safety being prime consideration, there could not be any cause for compensation for reputation.

M5: What do you think about the killing of witnesses in the Asaram case?
Paramvir Singh: Yes sir, a lot of witnesses have been killed one after the other and it could prove detrimental to the criminal trial.

M3: (jokingly) Do you think it could be a coincidence?
Paramvir Singh: No sir, clearly the repeated killing is not a coincidence.

M5: So what should be done?
Paramvir Singh: Sir, the responsibility lies on the police to protect all the witnesses, and it should take every necessary action in order to do so. Also, the court should direct the same.

M4: Can the court draw negative inference against the accused?
Paramvir Singh: Ma’am, in a criminal trial, the burden of proof is on the prosecution to positively establish the case against the accused. However, the fact of killing can weigh on its mind while appreciating the positive evidence. The accused cannot, however, be convicted only on the basis of the negative evidence.

M5: Have you heard of the ”Kiss of Love”?
Paramvir Singh: Sir, it is the public event of kissing in Bombay?

M5: Yes, tell me about it.
Paramvir Singh: Sir, the participants were claiming that it is part of their liberty, that they can kiss in the public, whereas some right wing organisation claimed that it is obscenity and thus tried to interfere.

M5: What do you think is the legal position?
Paramvir Singh: Sir, obscenity is already an offence under the IPC.

M5: Do you think it was obscenity.
Paramvir Singh: Sir, the Supreme Court has adopted the ‘Hicklin Test’ for determination of obscenity, and the test is whether the object arouses prurient feelings in a reasonable man.

M5: So do you think it was obscenity?
Paramvir Singh: Applying the test, no sir, it is not.