My account
Get into your account.
LoginRegister
Plans
Home Learn Science Chickenpox and Shingles – Diseases Caused by Virus Varicella zoster 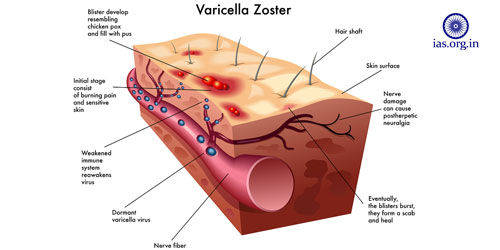 Virus Varicella zoster, a small infectious agent, replicates only inside the living cell of their organisms. All kinds of life forms, from animals and plants to micro-organisms, including bacteria and archaea, can be infected by viruses. In fact, virus is a micro-organism that can grow or reproduce only in a living cell. It is smaller than a bacterium. A virus, after entering living cells, uses their chemical machinery to sustain its life and to replicate itself. It reproduce with mutations. And this power to mutate becomes the source for the ability of some viruses to change slightly in each infected parson that makes treatment difficult.

Many common human infections are caused by viruses; Viral infections are also responsible for a number of rare diseases. Viral illnesses range from Common cold-caused by one of the rhinoviruses – to AIDS that is caused by HIV.

Must Read: The Ebola Virus

Chickenpox most commonly affects children between 5-10 years of age. The disease is reported throughout the year in regions of temperate climate. The peak incidence is generally during the months of March through May.

Symptoms and signs of chickenpox are – Fever, malaise, and a rash (red spots, blisters and crusted lesions). Serious complications, including pneumonia, encephalitis, and secondary skin infections.

Shingles is an infection of nerve and area of skin supplied by the nerve. Shingles is sometimes termed herpes zoster; however, this is very different from genital herpes, a sexually transmitted disease that is caused by a different virus called herpes simplex.

Almost 1 out of 5 people gets infected by the virus Varicella zoster causing Shingles at some time in their life. It is most common in People over the age of 50; however, it can happen at any age. It is, usually, uncommon to have Shingles more than once; however, 1 out 50 persons has Shingles two or more times.

In most cases no apparent reasons can be ascertained for the occurrence of Shingles. Sometimes, a period of stress or illness causes to trigger it. In young people the immune system prevents the virus from multiplying by keeping it inactive. In older people a slight weakening of the immune system can be hold accountable for the virus reactivation and multiplication that cause, in turn, Shingles.

People with poor immune system (immunosuppression) can also get infected, very easily, by the virus causing Shingles. It commonly occurs, for example, in younger people who have HIV/AIDS or whose immune system is suppressed with treatment such as steroids or chemotherapy. Symptoms of Shingles include pain and a rash. Usually only one nerve gets affected, on one side of the body, by the virus. Two or three nerves next to each other get affected occasionally. The pain can be anywhere on the body, depending on which nerve is affected. The pain can vary from mild to serve. The rash, generally, appears 2-3 days after the pain begins. Red blotches appear that quickly take the form of itchy blisters. An episode of shingles generally lasts for 2-4 weeks. One cannot get shingles from someone who has shingles. However, a pregnant woman who has not had chickenpox should avoid people with shingles.