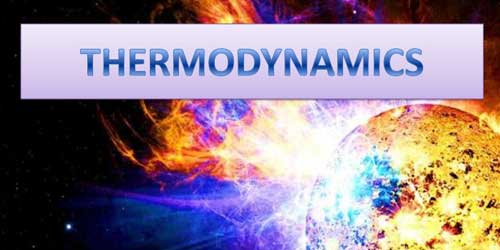 Thermodynamics is the science that deals with work and heat—and the transformation of one into the other. It is a macroscopic theory, dealing with matter in bulk, disregarding the molecular nature of materials. The corresponding microscopic theory, based on the fact that materials are made up of a vast number of particles, is called statistical mechanics.

Must Read: Laws of Motion

The origins of thermodynamics can be traced to the late eighteenth century. English-American physicist Benjamin Thomson, Count Rumford (1753–1814), became intrigued by the physical changes accompanying the boring of cannons. (Boring is the process of making a hole—in this case the barrel of the cannon—with a twisting movement.) He found that the work (or mechanical energy) involved in the boring process was converted to heat as a result of friction, causing the temperature of the cannon to rise.

Some of the fundamental relationships involved in thermodynamics were later developed by English physicist James Joule (1818–1889), who showed that work can be converted to heat without limit. Other researchers found, however, that the opposite is not true—that is, that there are limiting factors that operate in the conversion of heat to work. The research of French physicist Sadi Carnot (1796–1832), British physicist William Thomson, Lord Kelvin (1824–1907), and German physicist Rudolf Clausius (1822–1888), among others, has led to an understanding of these limitations.

The laws of thermodynamics

The first law of thermodynamics is actually nothing other than the law of conservation of energy: energy can neither be created nor destroyed. It can be converted from one form to another, but the total amount of energy in a system always remains constant.

The first law of thermodynamics is sometimes stated in a somewhat different form because of the kinds of systems to which it is applied. Another statement is that the internal energy of a system is equal to the amount of work done on the system plus any heat added to the system. In this definition, the term work is used to describe all forms of energy other than heat.

The first law can be thought of as a quantitative law (involving measurement of some quantity or amount): the amount of energy lost by one system is equal to the amount of energy gained by a second system. The second law, in contrast, can be thought of as a qualitative law (involving quality or kind): the second law says that all natural processes occur in such a way as to result in an increase in entropy.

It is first necessary to explain the concept of entropy. Entropy means disorder.

The second law of thermodynamics simply says that any time some change takes place in nature, there will be more entropy—more disorganization—than there was to begin with.

The second law is sometimes described as the “death of the universe” law because it means that over very long periods of time, all forms of energy will be evenly distributed throughout the universe. The waste energy produced by countless numbers of natural processes will add up over the millennia until that is the only form in which energy will remain in our universe.

Must Read: Laws of refraction of light

Some facts about Thermodynamics

Laws of refraction of light