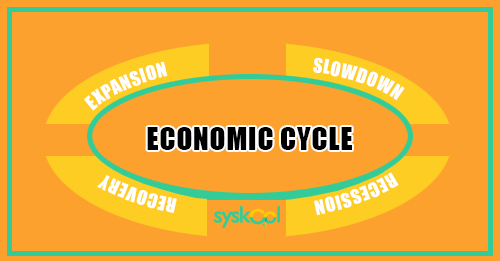 All economies are going through a constant cycle of changes. This cycle can be described by a series of stages. You’ve probably heard people say things like “the economy is booming” or “we are in a recession.” These are some of the various stages of the economic cycle. It is sometimes called the business cycle.

Stages of the Economic Cycle

We will describe four of the basic stages of the economic cycle below:

Have a Look at: Method of Measuring National Income

At some point, the rapid growth of the expansion stage has to come to an end. When the economy starts to slow, but is still growing, this is called the slowdown stage. Sometimes economists call a slowdown a “downturn” in the economy. Indicators of an economic slowdown include:

Must Read: Economics: The Basics

A recession is when the economy stops growing. Economists define a recession as two-quarters in a row where the GDP (Gross Domestic Product) gets smaller. A lot of times a recession is started by some sort of major negative event. It could be something like a number of banks failing, a stock market crash, or even a terrorist attack (like in the 2001 9-11 attack). Indicators of an economic recession include:

You May Also Read: National Income

When the economy starts to come out of a recession and begins to improve, this is called the recovery stage. Indicators of an economic recovery include:

How long does each stage of the cycle last?

There is no set time on how long each stage will last. Sometimes countries languish for years in a very slow recovery. Sometimes they experience a quick expansion and then immediately enter into a slowdown. In some cases, an economic cycle can skip the recession stage altogether and just enter into a long slowdown state. Economists call this a “soft landing.”