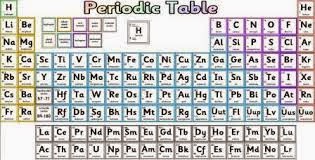 Periodic Table is a table of the chemical elements arranged in order of atomic number, usually in rows, so that elements with similar atomic structure (and hence similar chemical properties) appear in vertical columns.

Laws of Physics and Chemistry

Gokul GR was the last candidate in the list. This is the transcript of the interview: Gokul GR: May I come in, Sir? The chairman asked...
Read more

Kuldeep Dwivedi has secured the All India Rank 242 in the Civil Services Exams conducted by UPSC, paving the way for his future as an...
Read more

1510 Portuguese Catholics conquer Goa under Albuquerque, the then Governor, to serve as capital of their Asian maritime empire beginning conquest and exploitation of India...
Read more

The United Nations Educational, Scientific and Cultural Organization (UNESCO) is a specialized agency of the United Nations (UN). Its purpose is to contribute to...
Read more
Previous Papers

Which organelle in the cell, other than nucleus, contains DNA? (a) Centriole (b) Golgi apparatus (c) Lysosome (d) Mitochondrion Explanation: Both Mitochondrion and chloroplast in plant cell contain DNA. Beside...
Read more
Previous Papers