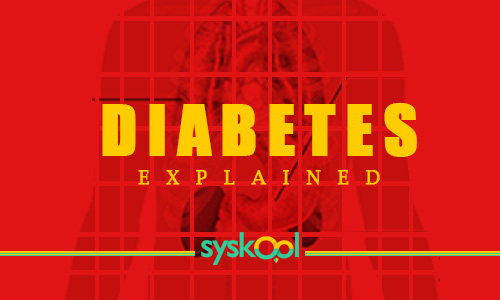 Diabetes mellitus is an endocrine disease commonly known as diabetes in which our body fails to use and store glucose properly. This causes blood glucose (or blood sugar) to rise too high., this condition is known as hyperglycemia.

There are two types of this disease Type 1 is a juvenile onset and insulin dependent diabetes that affects young adults. Insulin producing cells in pancreas stops working or gets destructed to cause this type of diabetes.

You may also like: The First-ever National- level Study On Diabetes And BP

Type 2 is adult onset and non insulin dependent diabetes. In this type body produces insulin but not enough to convert all glucose into energy. Also the action of insulin shows impaired sensitivity. This type of diabetes is found in adults of more than 40 years age. Approximately 90% of all cases of diabetes worldwide are type 2.

Cause of diabetes may differ from person to person. Sometimes destruction of pancreatic cells in Type 1 diabetes is triggered by an autoimmune process may be the cause of any viral infection. Obesity is one of the major cause of Type 2 diabetes as the body requires the larger amount of insulin. Lifestyle changes and family history are other two major reasons.

Chances of getting diabetes are higher if you are over 40 years, overweight, African-American, Hispanic or Asian, and have close relatives with the disease. People who develop diabetes during pregnancy are more likely to have full-blown diabetes later in life.

You may also like: Surprising Health Benefits of Garlic

Great thirst, increased hunger, frequent urination, weight loss, high fatigue and wound healing difficulty are some of the main symptoms. In many cases, it is found that there were no symptoms recognized at all for months or years in case of Type 2.

Diabetes is most prevalent among Indian origin people. It is significantly reported from UK, South Africa, Singapore, Fiji, Trinidad but Indian living there are more prone to this disease than indigenous people.

Banting and Best discovered Insulin hormone in 1921. This discovery revolutionized the treatment of Type 1 diabetes by injection of insulin into the body. Type 2 diabetes is treated with the use of drugs which prompt production of more insulin in the body. Also, weight reduction, balanced diet, regular exercise helps with Type 2 diabetes.

Diabetic people, many have many serious complications if not treated well, such as bleeding in eyes from retinopathy, kidney degeneration, obstruction in large blood vessels etc. Excessive formation of ketone bodies may lead to diabetic coma or even death. Ketone bodies are acidic waste produced when protein and fats are consumed for energy.

Type 2 diabetes patients are advised to take their diet regularly on time. Because if a patient is on drug and he misses a meal his blood sugar level could come dangerously low. This condition is known as Hypoglycemia i.e. low blood glucose it can have a bad effect on the patient.

Later drugs lower blood glucose levels through Prandial Glucose Regulation, which refers to the process of regulating glucose at the time of eating. The concept became famous as ‘one meal, one dose – no meal, no dose’.