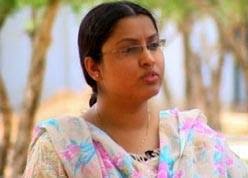 Her name is Kranti, which means revolution. And true to her name, Kranti as brought a mini-revolution in her village in Haryana. She’s become the first women in her district to clear the Civil Services.

As the village elders come to congratulate her it’s her moment of vindication. They all said she couldn’t do it ——-– she’s from a village school, she’s a woman and to top it all she walks with a limp.

But Kranti soldiered on. “I never let that talk affect me. If I would have felt I’m handicapped or disadvantaged, I would have lost the battle,” said Kranti.

Kranti was afflicted with polio when she was only two years old. And for the daughter of a backward class farmer in Haryana, it meant that her parents would have to pay a hefty dowry.

But breaking set norms her mother insisted Kranti be sent to school. And the little girl who regularly got teased for her limp is today the pride of her school, an inspiration to all the girls around her. And her mother is no longer worried about getting her married.

“Times haven’t changed. Girls in my community still get married at the age of 18,” said Kranti’s mother Maya.

Kranti’s story is remarkable for another reason – she never got the opportunity to go to college so she completed her studies through correspondence But now her success has ensured that her sister goes to college.

She too wants to be an IAS officer one day. For those who think that their destiny is ruled by their circumstances, Kranti’s story is perhaps an eye-opener.