My account
Get into your account.
LoginRegister
Plans
Home Stories Where there is a will: How a tailor’s son cracked the hallowed... 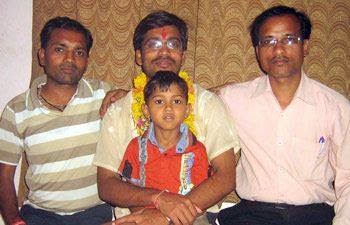 A poor youngster from the Bhind district of Madhya Pradesh, who overcame massive odds to emerge successful in the all-important Civil Services examinations, has proved that poverty is not an impediment to success.

Nirish Rajput (31), son of Virendra Rajput, a tailor, failed the civil service examination three times but never lost heart. The fourth time, he passed with a rank of 370 and has been selected for the Indian Administrative Service.

Nirish’s story is inspiring not because he did not lose heart but also because he comes from a very poor background. He lives in a 15 by 40 feet (300 square feet) house in village Mau in Gohad tehsil of the district and worked odd jobs – even as a newspaper hawker – to realize his dream of becoming an IAS officer.

Once, Nirish went with a considerably rich and respected family friend to Uttrakhand to help them set up a coaching institute with a promise they would help him by providing material to prepare for his Civil Services examinations. But two years later, after the coaching institute started paying rich dividends, he was insulted, disgraced and literally thrown out.

“What is your worth? You are good for nothing. We no longer want you”, that were the last words I heard from the members of that educated and rich family, said Nirish. “Next moment, I was jobless, homeless, penniless and remained hungry for a week, till help came to me”, he narrated.

> The incident changed the course of Nirish.

“I did not know how to become an IAS officer but I knew clearing the country’s top examinations can change my fortune”, he said, adding that poverty cannot be a hurdle if one has determination and is willing work hard.

One day Nirish left for Delhi to study. “In Delhi, I became friendly with Ankit, who was preparing for competitive exams. I started living with him at Delhi’s Mukherjee Nagar and studied 18 hours a day. I did not attend any coaching classes nor pay any hefty fees. I studied from the books and notes of Ankit,” he said.

He studied from a government school and a modest college in Gwalior. His father and two elder brothers, who are contractual teachers, started investing most of their savings, energy and courage to make Nirish’s dream come true.

“It has also proved the impression that students from public schools alone can do well in these exams is a myth,” he said.

> The House and family

Virendra’s (72) ramshackle house in a non-descript village in Bhind district has suddenly become the attraction of the entire neighborhood. Popularly known as ustaad in the village for his hand-to-hand combat style (aiming to hold the opponent down against the floor) in the Akharas, Virendra, a father of three sons and a daughter, had lived with only one dream – to give his children an education.

After the demise of Nirish’s mother, it is the father who is keeping the children’s spirit alive. “My father has told me not be dishearted and to reappear in the entrance exam in the next year”, he added.

“Even when my mother was alive, I never saw them disgusted and heard them grumbling for poverty that has stricken our family,” he said.