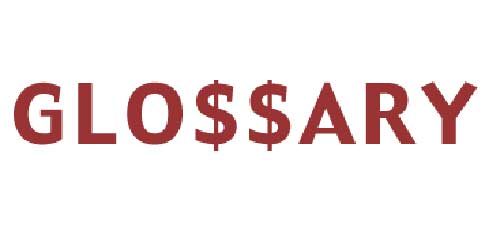 Balance of trade – The part of a nation’s balance of payments that deals with merchandise (or visible) imports or exports.

Barter – The direct trading of goods and services without the use of money.

Bond – A certificate reflecting a firm’s promise to pay the holder a periodic interest payment until the date of maturity and a fixed sum of money on the designated maturity date.

Business (firm) – Private profit-seeking organizations that use resources to produce goods and services.

Capital – All buildings, equipment, and human skills used to produce goods and services.

Competition – The effort of two or more parties acting independently to secure the business of a third party by offering the most favorable terms.
Consumers – People whose wants are satisfied by consuming a good or a service.

Consumption – In macroeconomics, the total spending, by individuals or a nation, on consumer goods during a given period.  Strictly speaking, consumption should apply only to those goods totally used, enjoyed, or “eaten up” within that period.  In practice, consumption expenditures include all consumer goods bought, many of which last well beyond the period in question –e.g., furniture, clothing, and automobiles.

Corporation – A legal entity owned by stockholders whose liability is limited to the value of their stock.

Costs of production – All resources used in producing goods and services, for which owners receive payments.

Credit – (1) In monetary theory, the use of someone else’s funds in exchange for a promise to pay (usually with interest) at a later date.  The major examples are short-term loans from a bank, credit extended by suppliers, and commercial paper.  (2) In balance-of-payments accounting, an item such as exports that earns a country foreign currency.

Deflation – A sustained and continuous decrease in the general price level.

Demand – A schedule of how much consumers are willing and able to buy at all possible prices during some time period.

Economic growth – An increase in the total output of a nation over time.  Economic growth is usually measured as the annual rate of increase in a nation’s real GDP.
Economic system – The collection of institutions, laws, activities, controlling values, and human motivations that collectively provide a framework for economic decision making.
Economic wants – Desires that can be satisfied by consuming a good or a service.  Some economic wants range from things needed for survival to things that are nice to have.

Entrepreneur – One who organizes, manages, and assumes the risks of a business or enterprise.

Entrepreneurship – The human resource that assumes the risk of organizing other productive resources to produce goods and services.

Equilibrium price – The market clearing price at which the quantity demanded by buyers equals the quantity supplied by sellers.

Exchange rates – The rate, or price, at which one country’s currency is exchanged for the currency of another country.

Excise Tax – Taxes imposed on specific goods and services, such as cigarettes and gasoline.

Exports – Goods or services produced in one nation but sold to buyers in another nation.

Factors of production –  Resources used by businesses to produce goods and services.

Federal Reserve System – The central bank and monetary authority of the United States.

Final goods – Products that end up in the hands of consumers.

Fiscal policy – A government’s program with respect to (1) the purchase of goods and services and spending on transfer payments, and (2) the amount and type of taxes.

Functions of money – The roles played by money in an economy.  These roles include the medium of exchange, the standard of value, and store of value.

Government – National, state and local agencies that use tax revenues to provide goods and services for their citizens.

Gross domestic product (GDP) – The value, expressed in dollars, of all final goods and services produced in a year.

Incentives – Factors that motivate and influence the behavior of households and businesses.  Prices, profits, and losses act as incentives for participants to take action in a market economy.

Imports – Goods or services bought from sellers in another nation.

Income – The payments made for the use of borrowed or loaned money.

Inflation – A sustained and continuous increase in the general price level.

Interest rates – The price paid for borrowing money for a period of time, usually expressed as a percentage of the principal per year.

Investment – The purchase of a security, such as a stock or bond.

Law of demand – The principle that price and quantity demanded are inversely related.

Law of supply – The principle that price and quantity supplied are directly related.

Market – A setting where buyers and sellers establish prices for identical or very similar products, and exchange goods and/or services.

Monetary policy – The objectives of the central bank in exercising its control over money, interest rates, and credit conditions.  The instruments of monetary policy are primarily open-market operations, reserve requirements, and the discount rate.

Natural resources – “Gifts of nature” that are used to produce goods and services.  They include land, trees, fish, petroleum and mineral deposits, the fertility of soil, climatic conditions for growing crops, and so on.

Producers – People who use resources to make goods and services (also called workers).

Production – The making of goods available for use; total output especially of a commodity or industry.

Productivity – The ratio of output (goods and services) produced per unit of input (productive resources) over some period of time.

Profit – The difference between total revenues and the full costs involved in producing or selling a good or service; it is a return for risk taking.

Resources – All natural, human, and human-made aids to the production of goods and services (also called productive resources).

Revenue – Payments received by businesses from selling goods and services.

Scarcity – The condition that results from the imbalance between relatively unlimited wants and the relatively limited resources available for satisfying those wants.

Shortage – The situation resulting when the quantity demanded exceeds the quantity supplied of a good or service, usually because the price is for some reason below the equilibrium price in the market.

Tariff – A tax on an imported good.

Unemployment – The situation in which people are willing and able to work at current wage rates, but do not have jobs.

Wages – The payment resource earners receive for their labor.

Work – Employment of people in jobs to make goods or services.

You May Also Read: