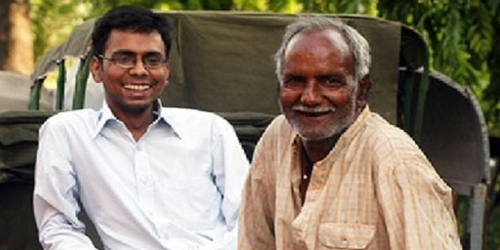 Govind, unlike most of the toppers, cleared his exam in his 1st attempt at the age of 22 years and whose success story motivates and inspires thousands of youths across India. He was ranked 48th position among 474 candidates in the Civil Services Exam held in year 2006.

Govind Jaiswal used to spend most of his time studying with cotton jammed in his ears to avoid the extreme clatter of printing machines and generators of his neighbourhood.

His father Narayan Jaiswal, a rickshaw puller in Varanasi , sold off his land to provide him education. His mother was a house wife, he has three sisters and one brother.

His father gave him 40,000 to prepare for his Civil Sevices Exam in New Delhi and pursue his childhood dream of becoming an IAS officer. Govind Jaiswal wanted a good medical treatment of his father’s wound with his first salary so that he could heal fast. His father was his role model for him to fight any difficult situation in life.

He opted Philosphy as his optional subject.

He studied in Government School and from a modest College in Varanasi.

He had only one dream throughout his life and that was to become an officer of the Indian Administrative Service.

Govind used to get inspiration from APJ Abdul Kalam for developing India. He used to read the Hindi translation of President’s book Wings of Fire. He said that after Gandhiji, President Kalam has given us a dream and the power to dream.