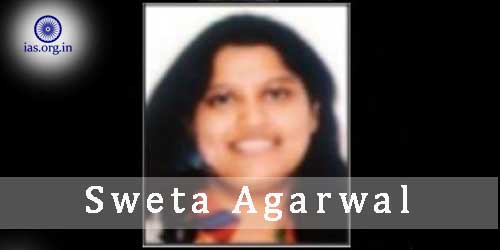 The daughter of a grocer from Bhadreshwar, gave Bengal a reason to smile as Sweta Agarwal has finally realised her dream of becoming an IAS officer by securing the 19th rank in the UPSC exams. Sweta Agarwal’s is yet another heart-warming story of overcoming the odds, becoming one of only three women to make it to the top 20 and the topper from Bengal. First girl topper is Tina Dabi and Second girl topper is Artika Shukla.

Her parents also made Sweta Agarwal to understand society and wanted her to serve the people. She expressed her happiness about her dad who was grocer initially. Grocer’s daughter takes pride in saying how her parents gave her the best of education despite battling abject poverty.

Sweta Agarwal comes from a very modest background. It is because of her hard work and determination that she achieved this rank. Sweta Agarwal was all praise for her parents Santosh and Prema who gave her great support inspite of being very poor financially. Sweta’s father has studied till the 12th standard and her mother was married off when she was around 16. Despite struggling to make ends meet, the family strove to provide their daughter with a good education. Her father runs a small grocery shop in Bhadreswar in West Bengal and her mother is a housemaker.

It is often said that poor parents would not be able to provide financial support for educating their kids. Ask Sweta Agarwal she would tell it’s not true and she was sent to the best school. Grocer’s daughter Sweta Agarwal has ranked 19th in the famous Civil Services Exams. Her rank is the highest attained by any Bengal candidate in years. “It’s like finding your goal at last,” she gushed.

Sweta Agarwal spoke with parents for an hour on getting the results. “They are the world’s best parents. Despite going through abject poverty, they sent me to the best schools possible.” Her parents are the best also because they did not ask her marry her off early and gave her full freedom to pursue her dreams of becoming an IAS officer, she says.

Sweta Agarwal says, “My father is a baniya only as far as his profession is concerned. He started out in a small way as a grocer, but shifted to other businesses. But unlike his community (trade), he never thought of marrying me off – his only child. He has no fear of what society might say. He let me grow in the true sense of the term.”

Sweta Agarwal left her job in Deloitte India to study for the exam. “I am my parents’ only child and they always believed in me. Today, they are on cloud nine. My parents went to Hindi-medium schools, but made sure I knew English very well. They also made sure I could serve the nation,” she said with a broad smile.

Also Read: Both Brother and Sister of Panipat Cleared the UPSC Exam

Sweta Agarwal opted for Sociology as her optional subject. With a success rate of less than one percent, the Civil Services Examinations conducted by the Union Public Service Commission (UPSC) are dubbed the most competitive exams in the country. But Sweta Agarwal have proved that with grit and determination, she wrote her own success story.

“I think I would be the first IAS officer from Bhadreshwar. It means a lot to me – I feel strongly about my roots, which is Bengal,” Sweta Agarwal explained. The last big success for woman power from Bengal was in 2013 when a Kolkata girl ranked 84.

Sweta Agarwal had cracked the UPSC exams twice before, qualifying for IRS and IPS but kept her sights on her childhood dream of becoming an IAS officer. But this was her third attempt to clear the prestigious UPSC Exam. Currently, she is undergoing her IPS training in Hyderabad and wishes to get the Bengal cadre in IAS. It was a day of double delight and a dilemma.

She got qualified for IPS last year and was training at the National Police Academy. One mind boggling piece of news is it is the highest rank achieved by any Bengali candidate in many years. Having already bagged the Bengal IPS cadre she wants Bengal IAS cadre too as she don’t want to lose Bengal.

Sweta feels strongly glad about joining the Bengal cadre. Most youngsters, especially from Bengal, shy away from Civil Services because they feel they would be serving political bosses instead of the public. So the best talents go off to the IITs and earn material wealth. Sweta is happy that more and more students are appearing for Civil Service these days, looking to make a difference to governance and public service.