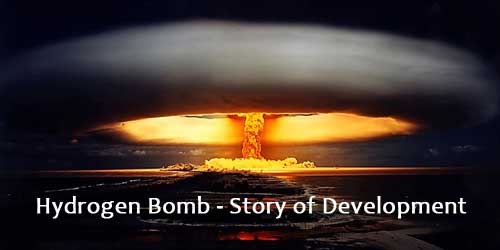 In 2016 North Korea claimed the Hydrogen Bomb Development by their scientists and its successful test and left entire world shocked and terrorised.

Later Observers also confirmed that a nuclear explosion has taken place which must be bigger than that of the last test in 2013, but not nearly big enough to be a full thermonuclear explosion – an “H-bomb” – as Pyongyang claims. But in contemporary research they cleared and agreed that a part of thermonuclear device has been tested by North Korea.

All this started with the decision of Harry S. Truman, the American President to fund and support the development of a weapon theorized to be hundreds of times more powerful than the nuclear bomb dropped on Japan. This decision was taken on 31st January, 1950.

This was beginning of the race to build a Super bomb among super powers.

What was the need of a new bomb as US already had deadly nuclear weapon?

The decision of Hydrogen Bomb Development in US came five months after Soviet Union snatched away the nuclear supremacy of US by successfully detonating an Atomic Bomb in Kazakhstan.

US intelligence concluded that Klaus Fuchs, a German-born scientist of top ranks who was involved in the US nuclear weapon development program (Manhattan Project) turned out to be a Soviet spy. He was alleged for transferring all the knowledge that US had about nuclear bomb to Soviet Union.

This incident forced United States to give massive fund to another program for development of super bomb and reclaim its supremacy in war weapons.

Mike was a 10.4 megaton thermonuclear device built upon the Teller-Ulam Principle of Stage Radiation Implosion.

This bomb instantly vaporized the entire island leaving behind a more than mile wide crater only. A mushroom cloud of 1,20,000 feet high ceiling, 60 miles across stretch was formed in few minutes.

Who was next to detonate H-Bomb?

Of course Soviet Union, three years later on 22 Nov, 1955 detonated its first Hydrogen bomb which was working on the same principle of Radiation Explosion.

The detonation by Soviet Union defeated the purpose of hydrogen bomb development by US, and today it has gone into the hands of a country which is not counted among responsible nation by rest of the world.