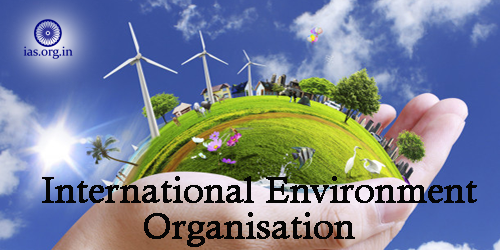 There are many International Environmental Organizations like World Wildlife Fund (WWF) that are working for the protection of our environment. The biggest among them is the International Union for the Conservation of Nature and Natural Resources or the IUCN that was founded in 1948 with its headquarters in Switzerland.

IUCN has, according to the latest information, brought together 84 states, 111 government agencies, 764 NGOs (Non-Government Organizations), 83 international organizations, and about 10,000 experts and scientists from all over the world.

IUCN, that is made of three parts- its member organization, its scientific commissions and its professional secretariat to preserve nature, conserve natural wealth and to utilize natural resources carefully. Only then can we make sure that we pass on the earth’s beautiful and charming gifts to the children of future.

IUCN maintains an international list of species facing extinction, published bearing the name of the Red Data Book, in which the species are classified into different categories according to the risk they face. Each Red Data Book generally deals with a specific group of animals or plants, whether they are raptiles, insects or mosses. Red Data Books are now being published in many different countries.

It was founded by the United Nations as a special agency to deal with issues affecting the environment. It was set-up in June 1972,, as a direct result of the United Nations Conference on the Human Environment, and is headquartered in Nairobi, Kenya. UNEP has six regional offices and various country offices.

UNEP leads and encourages partnership among nations and people in caring for the environment, by inspiring, informing, and enabling peoples to improve their quality of life without compromising the welfare of future generations.

The activities of UNEP cover a wide range of issues related to atmosphere, marine and terrestrial ecosystems. One of its most famous projects is the development of the Solar loan programme that assisted about 100,000 people in getting finance for solar power systems in India.

Another significant project of UNEP was the Marshland Project in the Middle East that warned the international community to the annihilation of the Marshland.

When Sir Julian Huxley, the renowned British biologist, went to Africa for a research trip. What he did sea there, shook him completely. He was dismayed by the unclenched destruction of nature and the hunting of endangered species.

When Sir Huxley returned in 1960, he shared his concern, that many species would become extinct it the condition persists in Africa, with fellow scientist and other prominent personalities. Finally they agreed to begin an international organization with the scientific, technical and financial resources to conduct and fund conservation efforts across the globe.

Panda as the Logo of World Wildlife Fund

When, in 1961, the World Wildlife Fund was being created, a giant Panda, Chi-Chi, arrived at the London Zoo that became the inspiration for the panda in WWF’s world’s recognized logo. Sir Peter Scott, one of WWF’s founders, who had drawn the first logo said “we wanted an animal that is beautiful, is endangered, and tone loved by people around the world. We also wanted an animal that symbolized all that was disappearing in the natural world.

It is an international organization that was set up to make the people of the world aware of the America use of the Aleutian Island as a nuclear test site and the dangers of nuclear testing. It was established in 1971 in Vancouver, Canada.

After accomplishing its objective of protest against nuclear testing in the Aleutian Island, Greenpeace widened to include the protection of the ozone layer by curbing the use of ozone depleting chemicals, and the prohibition of the dumping of waste in the Oceans.

Greenpeace also aims to protect ancient forests and the environment by banishing the use of hazardous chemicals that damage humans, animals and plants. It seeks to halt the hunting of whales that face extinction organism into nature.

Through the movement of Greenpeace began in 1970, Greenpeace international or GPI, as it presently exists, was set up in 1971 with its headquarters in Holland. GPI remains at the centre of a closely knit network of national and regional offices.

Once a campaign is chosen, it becomes the job of the GPI campaign Director to plan and execute the campaign. Some national offices can run their separate campaigns too. For instance, the UK has a campaign to prohibit the use of incinerators to burn rubbish, while Canada is pursuing with a campaign to save ancient forest.