India is one of the top five countries in the world with favourable water resources (others are Canada, Brazil, Russia and Congo). Among the total water resources of the country, Indian rivers constitute the major share.The water in these rivers is used for various purposes including agriculture, production of electricity, storing water in dams and so on. Indian rivers are mainly divided into two types: 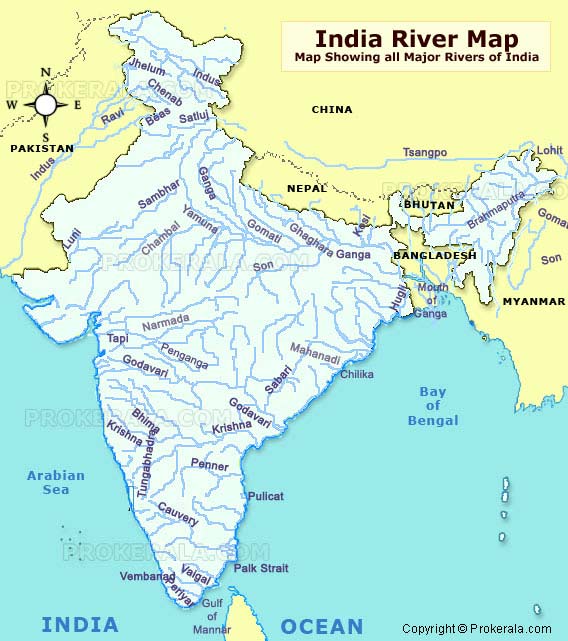 As the name suggests, these rivers originate from Himalayan Mountains. The sources of water are rainfall and melted snow. As they come from high altitudes they flow with high speed and have larger and deep courses. INDUS, GANGES, and BRAHMAPUTRA along with their respective tributaries are the main Himalayan Rivers.

SOURCE: The Indus River rises in Tibet near Manas Sarovar Lake. Flowing westwards, it enters India in Ladakh district of Jammu and Kashmir.

COURSE: It flows through the states of Jammu and Kashmir, Himachal Pradesh andPunjab in India then enters Pakistan and flowing further south reaches the Arabian Sea, east of Karachi.

CHARACTERISTICS: The slope is very gentle and with 2900 km length, Indus River is one of the longest rivers in the world.

SOURCE:The Ganges River originates in Gangotri glacier as Bhagirathi and joined by Alaknanda at Devprayag, It turns into Ganga.

COURSE: The Ganga River enters plains in Haridwar and from there it flows eastwards enlarged by the tributaries joining from left and right. The river divides in West Bengal and the distributary Hooghly flows southward to reach the Bay of Bengal. The main river enters into Bangladesh and joins with Brahmaputra river.It covers the states of Uttarakhand, Uttar Pradesh, Bihar and West Bengal.

CHARACTERISTICS: The length is 2500 km and the slope is almost steep in the Himalayas and gentle in the plains. With more number of tributaries, the basin of the river is very huge.

SOURCE: The Brahmaputra River originates in Tibet to the east of Manas Sarovar Lake.

COURSE: The Brahmaputra River mostly flow outside India from the point of its origin and in the middle course, enters Arunachal Pradesh and later into Assam. Then, it flows eastwards into Bangladesh. In Bangladesh, Brahmaputra River is called as River Padma.

TRIBUTARIES: In Arunachal Pradesh Dibang, Lohit and Kenula Rivers are its tributaries.

CHARACTERISTICS:The length of the river is 2900 km and is one of the longest rivers of the world.

These rivers are confined to the peninsular region and are dependent on rainfall for water. Unlike Himalayan Rivers, these rivers are shorter with small basins. NARMADA, TAPI, GODAVARI, KRISHNA, CAUVERY and MAHANADI are the main rivers.

It is known as DAKSHIN GANGA due to its area covered (over 1500 km). The Godavari River originates in Nasik in Maharashtra and covers the states of Madhya Pradesh, Orissa, and Andhra Pradesh. Flowing eastwards, it joins in the Bay of Bengal.

It rises near MAHABALESHWAR in Maharashtra and covering an area of 1300 km, it flows through Maharashtra, Karnataka, and Andhra Pradesh and reaches the Bay of Bengal.

Cauvery River originates in the Western Ghats and covering an area of 760 km, it reaches the Bay of Bengal in Tamil Nadu. The states covered are Karnataka, Kerala and Tamil Nadu.

Besides the above other rivers include Mahi, Sabarmati, Subarna Rekha and so on.

All the rivers in India, despite their location, are considered holy by the people. There is a proposal of interlinking all the Indian rivers in order to utilise the waste flowing water in drought areas.