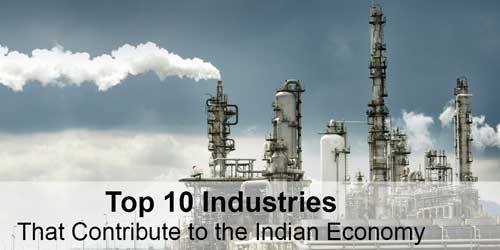 The Indian Economy is the 9th largest economy of the world and also one of the fastest growing world economies. The most top industries contributing to Indian economy are:

10 Industries that Contribute to Indian Economy are:

Retail industry is the chief pillar supporting the Indian economy and contributes 23% towards the national GDP. The retailing industry comprises of general stores, hand cart vendors, convenience stores and domestic outlets. The new concept of retail supermarkets has worked well and accounts for 4% of total retail market.

India is the 2nd largest producer of farm produce. Agriculture Industry, apart from farming also includes forestry and fishing. It employs half the production of India and makes a contribution of 15.7% to the GDP. The Green Revolution in India has brought significant wealth to the farmers of Indian states of Punjab, Haryana and Uttar Pradesh.

The urban sectors of India are expanding which means increasing land requirements for educational institutions, healthcare, offices and buildings. It has attracted both domestic real estate developers as well as foreign investors. It contributes around 13.5% of GDP.

It is well-evolved industry serving as a boon for economic development of India by providing long-term funds for development of infrastructure. Besides, it strengthens the risk taking capacity of the country. The country’s gross domestic saving stands around 32.7%, most of it invested in personal assets like land, property or gold.

IT and ITES Industry

The Information technology industry is a knowledge based industry with skilled professionals in India. It has been the chief industry that has led the services sector account for whooping 64% of the entire GDP. The IT sector contributes almost about 9%the national GDP. Exports from the essence of the IIT-IITES industry earns about 77% of the total industry income.

A large section of capital goods essential for power plants, agriculture technology, cement and construction and steel plants as well as mining essentials are manufactured in India. It is also an efficient producer of tractors, harvesters, earth movers, cars, air pollution control equipment etc. In 2012 this sector alone made a contribution of 8% to the Indian GDP.

It is one of the earliest of all Indian industries contributes considerably to Indian Economy. It manufactures 70,000 products ranging from toiletries and plastics, to cosmetic, pharmaceuticals, fertilizers and many more. This industry contributes around 7% annually to GDP of India.

It provides for around 6.23% of the national GDP and also accounts for 8.7% of the total national employment. Added to it is the diversity in terrain which attracts tourists who wish to enjoy a complete package. Medical, business as well as sports to tourism has become popular and adds more to the potentials of this industry.

Indian Textile Industry is one of the leading textile industries in the world and largely depends upon the textile manufacturing and export. The textile sector accounts for 14% of the total industrial production, contributes about 4% to nation GDP and earns India 17% of its total exports. Around 35 million people are directly employed in this industry.

Must Read: Top 10 Largest Economies of the World