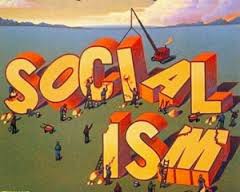 Socialism is a social and economic system characterised by social ownership of the means of production and co-operative management of the economy, as well as a political theory and movement that aims at the establishment of such a system. “Social ownership” may refer to cooperative enterprises, common ownership, state ownership, citizen ownership of equity, or any combination of these.

There are many varieties of socialism and there is no single definition encapsulating all of them. They differ in the type of social ownership they advocate, the degree to which they rely on markets or planning, how management is to be organised within productive institutions, and the role of the state in constructing socialism.

A socialist economic system is based on the organisational precept of production for use, meaning the production of goods and services to directly satisfy economic demand and human needs where objects are valued based on their use-value or utility, as opposed to being structured upon the accumulation of capital and production for profit.

The origins of socialism as a political movement lie in the Industrial Revolution. Its intellectual roots, however, reach back almost as far as recorded thought—even as far as Moses, according to one history of the subject. Socialist or communist ideas certainly play an important part in the ideas of the ancient Greek philosopher Plato, whose Republic  depicts an austere society in which men and women of the “guardian” class share with each other not only their few material goods but also their spouses and children. Early Christian communities also practiced the sharing of goods and labour, a simple form of socialism subsequently followed in certain forms of monasticism. Several monastic orders continue these practices today.

The term “socialism” was created by Henri de Saint-Simon, one of the founders of what would later be labelled “utopian socialism”. The term “socialism” was created to contrast against the liberal doctrine of “individualism”, which stressed that people act or should act as if they are in isolation from one another. The original socialists condemned liberal individualism as failing to address social concerns of poverty, social oppression, and gross inequality of wealth.  The term socialism is attributed to Pierre Leroux, and to Marie Roch Louis Reybaud in France; and in Britain to Robert Owen in 1827, father of the cooperative movement.

The system of social organization in which private property and the distribution of income are subject to social control; also, the political movements aimed at putting that system into practice . Because “social control” may be interpreted in widely diverging ways, socialism ranges from statist to libertarian, from Marxist to liberal. The term was first used to describe the doctrines of Charles Fourier, Henri De Saint – Simon, and Robert Owen, who emphasized non-coercive communities of people working non competitively for the spiritual and physical well-being of all.

Karl Marx and Friedrich Engels, seeing socialism as a transition state between Capitalism and Communism, appropriated what they found useful in socialist movements to develop their “scientific socialism.” In the 20th century, the Soviet Union was the principal model of strictly centralized socialism, while Sweden and Denmark were well-known for their non-communist socialism.

Christian socialism is a broad concept involving an intertwining of the Christian religion with the politics and economic theories of socialism. Islamic socialism is a term coined by various Muslim leaders to describe a more spiritual form of socialism. Muslim socialists believe that the teachings of the Qur’an and Muhammad are compatible with principles of equality and public ownership drawing inspiration from the early Medina welfare state established by the Prophet Muhammad. Muslim Socialists are more conservative than their western contemporaries and find their roots in Anti-imperialism, anti-colonialism, and Arab nationalism. Islamic Socialist leaders believe in Democracy and deriving legitimacy from public mandate as opposed to religious texts.

Anti-capitalism, anarchism, and the anti-globalisation movement rose to prominence through events such as protests against the World Trade Organization Ministerial Conference of 1999 in Seattle. Socialist-inspired groups played an important role in these movements, which nevertheless embraced much broader layers of the population and were championed by figures such as Noam Chomsky.