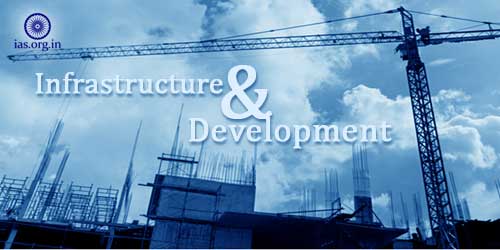 The term infrastructure and development points to core elements of economic and social change. These kernel elements serve as a support system to all production activities in the economy. Without these core elements, economic growth and social development would only continue to be primitive. It means it can at best yield subsistence; it cannot generate surplus to achieve higher levels of living.

Infrastructure and Development is Broadly Divided into two Categories:

The term economic infrastructure points to all key elements of economic change. These elements include power, transport and communication. They serve as a support system to the process of economic growth. Since it is an essential prerequisite to the process as a support of growth, without them it is virtually impossible to develop an efficient system of growth and development.

It can be safely ascertained that economic and social infrastructure is complementary to each other. Economic infrastructure provides us robust sources of energy, better means of transport and communication, besides efficient system of banking and finance. But all these elements of economic infrastructure would be of no use if the majority of population of a country remains to be illiterate and suffers from disease and sickness.

How infrastructure and development contributes to growth?

Similarly one cannot think of an enhanced industrial production without coal, petroleum and electricity as these are the main sources of energy.

Similarly can tourism industry prosper without the infrastructure of connectivity through roads, railways, waterways and airways.

In a fast developing country like India FDI has been accepted as instrumental in the growth process. Since the introduction of economic reforms in 1991, FDI has substantially increased in the Indian economy, mainly because of the expanding infrastructure.

Infrastructure Increases Size of the Market

It is a well known fact that large- scale production is possible only when size of the market is large. Means of transport are important components of economic infrastructure and core to the growth and expansion of an efficient market system.

This point covers the social infrastructure. Educational institutions, health care centres, and similar other facilities elevate skill formation which in turn enhance the people’s ability to work. This leads to the efficiency that is an important determinant of productivity and growth.

A country possessing a robust system of infrastructure rises as a destination for outsourcing. India is fast catching up as a global destination for study centres, call centres, medical transcription and such other services that is largely due to its profound system social infrastructure that is mainly a result of a revolutionary growth of IT sector.