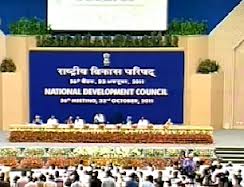 The National Development Council (NDC) or the Rashtriya Vikas Parishad is the apex body for decision making and deliberations on development matters in India presided over by the Prime Minister. It was set up on 6 August 1952 to strengthen and mobilize the effort and resources of the nation in support of the Plan, to promote common economic policies in all vital spheres, and to ensure the balanced and rapid development of all parts of the country.

The Council comprises the Prime Minister, the Union Cabinet Ministers, and Chief Ministers of all States or their substitutes, representatives of the Union Territories and the members of the Commissions.

It is an extra-constitutional and non-statutory body. Its status is advisory to Planning Commission but not binding.

The first meeting chaired by Prime Minister, Jawaharlal Nehru on 8–9 November 1952. So far 57 meetings had been held. The 57th Meeting of National Development Council was held on 27 December 2012 at Vigyan Bhavan, New Delhi.

It has been set up with objectives:

The NDC is the highest body, below the Parliament, responsible for policy matters with regard to planning for social and economic development. NDC makes its recommendation to the Central and State Governments and should meet at least twice every year.

NDC acts as a bridge and link between the Central Government, the State governments, and the Planning Commission, especially in the field of planning, to bring about coordination of policies and programs of plans.

Don’t Miss: MoU between Project Management Institute and IAHE: a Boon for MORTH

The functions of the Council are: