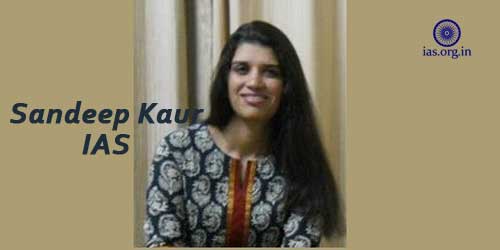 Setting an example for IAS aspirants, Sandeep Kaur secured 138th rank the fourth time and got selected for Indian Administrative Services after failing the Civil Service Exam for three times has given Punjab reasons to feel proud by attaining the 138rd rank in the open merit list of the All India Civil Services Examination.! Sheer hard work and inspiration from an old TV serial have helped Sandeep Kaur, a peon’s daughter, crack the tough Civil Services exam.

Message for IAS Aspirants, “If you don’t win the first time, Try, Try and Try again till you Succeed”.

Sandeep Kaur says after seeing her result, “I felt like I had a won a war that had been going on for many years. I felt free and relieved. I couldn’t have done it without the rock solid support of my family. I was very motivated after seeing the serial ‘Udaan’, the tale of a lower middle class girl who became an Indian Police Service officer.”

“I have given preference to the Punjab cadre. I would certainly work against female foeticide and for the uplift of girls which is a big problem in Punjab and she is prepared to serve anywhere in the country. Poverty eradication and equal opportunities for all will remain my priorities,” said Sandeep Kaur.

Must Read: The Road Ahead: WAITER TO IAS OFFICER

Sandeep Kaur comes from a small house in Morinda, a town 35 km away from Chandigarh. Sandeep Kaur is a daughter of Ranjit Singh, a peon in the Revenue Department. Her mother Amarjit Kaur is a housemaker. Sandeep is the eldest of her three siblings. Her brother Gurpreet Singh was studying law.

Sandeep Kaur attributes her success to her father and citing her father as her immense source of inspiration behind her success.  Sandeep Kaur told, “I am proud to be a peon’s daughter and I want my father to complete his service with full dignity. I owe my success to my parents and god. Despite meagre resources, my father provided the best facilities to me”.

A proud Sandeep’s mother told, “I wanted her to become an IAS officer since she was in Class 8 and now she has fulfilled my dream. It was certainly not an easy path and it was a journey full of disappointments and countless hiccups. But her strong determination helped her sail all the way”.

Sandeep Kaur studied at a small Hindi medium school in Morinda but her father shifted her to Chandigarh for her 10+2. Her hard work paid off and she not only passed her 10+2 with flying colours but also cleared the Common Entrance Test (CET) for Engineering. She did Engineering from the government-run Punjab Engineering College (PEC) as her father couldn’t afford to send her to private colleges. Even PEC was too expensive for her family as her father had to take many loans for her education. But when she failed to bag a job after graduation, she thought all her efforts had gone down the drain. She started taking tuitions from home but her father motivated her to take the Civil Services Examination.

Sandeep Kaur said, “After completing my engineering, I first wanted to do a job to become economically independent before starting preparations for IAS. But for two continuous years, I did not find any job, as there were very few opportunities for girls in the civil engineering sector. There was nobody to guide me and we did not have enough money to pay the hefty fees of coaching classes. Thereafter, my father took a bank loan to fund the cost of coaching institutes”.

Despite her engineering background, Sandeep Kaur meticulously chose the subjects of Sociology and Punjabi Literature. In 2007, she missed the Mains exam by a whisker. She got 933 marks whereas the cut-off was 936.

“My extended family also supported me during the preparations. Every day at 4 am my cousin or my father went to Kharar town, nearly 20 km by bus to bring a copy of Hindu newspaper as we did not get it here”, says Sandeep Kaur

As her family resources were limited, Sandeep Kaur never opted for any formal coaching for the Civil Services Examinations, in which she had not succeeded in a previous attempt.

Sandeep Kaur made the first two attempts (2005 and 2006) without taking any formal coaching. She failed the subsequent two tries as well as there was nobody to guide me. Her third attempt was in 2007 but she missed the Preliminary list by a mere three marks. It was frustrating. In fourth attempt she finally dedicated herself in preparing for the Civil Services and failure at earlier attempts made her stronger to prepare for the examinations and achieve the success.

During the Prelims she studied for 18 hours and for the Mains she increased it to over 20 hours. She had actually forgotten to sleep in pursuit of her dream. Overwhelmed by a deluge of accolades for clearing the Civil Services Examinations, Sandeep Kaur, acknowledges the major role played by The Hindu in her success. She did not miss any article on the Edit page as well as in the Opinion section.

To clear India’s top competitive exams, IAS in particular, nothing can be as greatly inspiring as success stories of real-life achievers from the country. These real life champions teach all us how to set bigger-than-usual goals and have strong determination to fight back tough times while daring to accomplish their dreams.