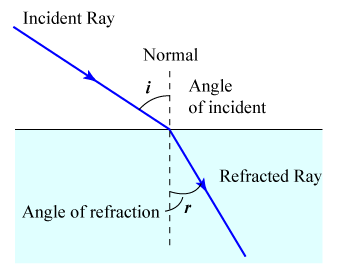 Laws of refraction of light :

ray of light passing from a rarer medium into a denser medium is deviated towards the normal at the point of striking the common surface of the two media. The ray is deviated away from the normal when the ray of light passes from a denser medium into a rarer one. (ii) The ratio of the sine of the angle of incidence to the sine of the angle of refraction is constant and is called the refractive index of the second medium with respect to the first medium. The second law is called the Snell’s Law.

Must Read:
Laws of Physics and Chemistry
LAWS OF CHEMICAL COMBINATION
LAWS OF THERMO-DYNAMICS