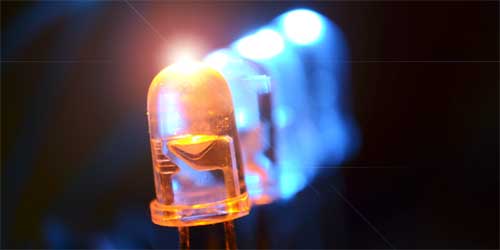 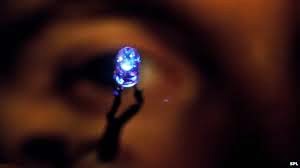 Light Emitting Diodes, commonly called LEDs, are real unsung heroes in the electronics world. They do dozens of
different jobs and are found in all kinds of devices. Among other things, they form numbers on digital clocks, transmit information from remote controls, light up watches and tell you when your appliances are turned on. Collected together, they can form images on a jumbo television screen or illuminate a traffic light.
Basically, Light Emitting Diodes are just tiny light bulbs that fit easily into an electrical circuit. But unlike ordinary incandescent bulbs, they don’t have a filament that will burn out, and they don’t get especially hot. They are illuminated solely by the movement of electrons in a semiconductor  material, and they last just as long as a standard transistor. The lifespan of an LED surpasses the short life of an incandescent bulb by thousands of hours. Tiny Light Emitting Diodes are already replacing the tubes that light up LCD HDTVs to make dramatically thinner televisions.
Must Read: Famous Scientists and Inventors
Light Emitting Diodes are specifically designed so they make light of a certain wavelength and they’re built into rounded plastic bulbs to make this light brighter and more concentrated. Red LEDs produce light with a wavelength of about 630–660 nanometers—which happens to look red when we see it, while blue Light Emitting Diodes produce light with shorter wavelengths of about 430–500 nanometers, which we see as blue.
We can also get Light Emitting Diodes that make invisible infrared light, which is useful in things like “magic eye” beams that trigger photoelectric cells in things like optical smoke detectors and intruder alarms.  Semiconductor
lasers work in a similar way to Light Emitting Diodes but make purer and more precise beams of light.
Nick Holonyak: he came up with the idea of the light-emitting diode in 1962 while he was working for the General Electric Company.

Also Read: Famous scientists and their Contribution or Discoveries