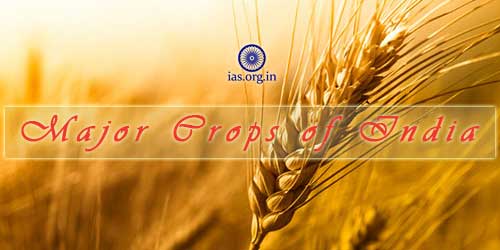 Agriculture is an old economic activity in our country which produces most of the food that we consume. Two-third of the total population of India is engaged in agricultural activities. Some of the major crops produced here are wheat, rice, maize and also tea, coffee, spices, etc.

Also Read:Crops of the world

A variety of food and non-food crops are grown in different parts of our country. They are:

It is grown in the plains of north and in the parts of north-eastern India; it is also cultivated in coastal and deltaic regions. India is the second largest producer in the world after China. Areas of less rainfall, such as Punjab, Haryana and Western Uttar Pradesh and parts of Rajasthan have been made appropriate for cultivation of rice with the development of canal and irrigation tubewells.

Must Read: Rice production in India

It is a kharif crop which in both used as food and fodder. Karnataka, Uttar-Pradesh, Bihar, Andhra Pradesh and Madhya Pradesh are the major maize-producing states of India. Production of maize have increased with the use of modern inputs such as HYV seeds, fertilizers and irrigation.

Bajra is grown in Rajasthan, which is the largest producer of bajra, followed by Uttar Pradesh, Maharashtra, Gujarat and Haryana.

It is the second most important cereal crop after rice and the two important wheat-growing zones of India are the Ganga- satluj plains in north-west and black soil region of the Deccan. Punjab, Haryana, Uttar Pradesh, Bihar, Rajasthan and Madhya Pradesh are the leading producers of wheat.

India is the second largest producer of sugarcane after Brazil. Sugarcane is the main source of sugar, gur, khandsari and molasses. Uttar Pradesh, Maharashtra, Karnataka, Tamil Nadu, Andhra Pradesh, Bihar, Punjab and Haryana are the sugarcane producing States of India.

Main oil-seeds of India includes mustard, groundnut, coconut, Sesamum (til), soyabean, caster seeds, cotton seeds, linseed and sunflower, in which some are edible and used in cooking. Also, some are used a raw material for the production of soap, cosmetics and ointments.

Groundnut is the major oil seed produced in Andhra Pradesh, Tamil Nadu, Karnataka, Gujarat and Maharashtra. Sesamum is a kharif crop in north and caster seed is grown both as rabi and kharif crop.

Must Read: Facts about Crops and Soils

Tea was introduced by British in our country, which grows well in tropical and sub-tropical climates endowed with deep and fertile well-drained soil.

Tea is processed in a tea garden to maintain its freshness and requires huge labour for its cultivation. The hills of Darjeeling and Jalpaiguri, Assam, West Bengal, Tamil Nadu and Kerala are the largest producers of tea in India. Some other tea producing states are Himachal Pradesh, Uttaranchal, Meghalaya, Andhra Pradesh and Tripura.

The varieties of India coffee has a demand all over the world mostly for its good quality. The Arabica variety, which is brought from Yemen, is produced in India which was initially introduced on the Baba Budan Hills and now-a-days, it is confined to Nilgiri in Karnataka.

India is very famous for its fruits and vegetables around the would and is the largest producer as well.

The fruits like Mangoes, which is mostly produced in Maharashtra, Andhra Pradesh, Uttar Pradesh and West Bengal, Oranges which are produced in Nagpur and Cherrapunjee, Bananas of Kerala, Mizoram, Maharastra and Tamil Nadu, Lichi and guava which is grown in Uttar Pradesh and Bihar are demanded all over the world. The other fruits of great demand are Pineapples of Meghalaya, grapes of Andhra Pradesh, Maharastra; Aplles, pears, Apricots and Walnuts of Jammu and Kashmir and Himachal Pradesh.

In vegetables, India is an important producer of pea, onion, cabbage, tomato, cauliflower, brinjal and potato.

Rubber is grown in Kerala, Tamil Nadu, Karnataka and Andaman and Nicobar Islands and Meghalaya which is mainly used in the industries.

India produces four major fibre crops which are cotton, jute, hemp and natural silk. Cotton, jute and hemp are grown in soil and natural silk is obtained from cocoons of the silkworms fed on the green (mulberry) leaves.

Jute has many uses such as in making gunny bags, mats, ropes carpets, yarn etc. which in grown on well-drained fertile soils of West Bengal, Bihar, Assam, Orissa and Meghalaya.