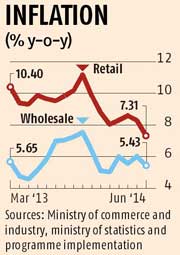 The Urjit Patel Committee report to revise and strengthen the monetary policy framework suggests some sweeping changes to overhaul the existing operating structures including a shift to CPI as the nominal anchor for inflation and moving to a model followed by the Federal Reserve to set up a monetary policy committee headed by the governor to vote on rate decisions. It also lays out a prescriptive roadmap to bring down inflation and makes recommendations for the government to reduce its fiscal deficit.

The main recommendations of committee are as follows:-

Must Read: Government to Appoint New Governor of Reserve Bank of India (RBI)

Inflation based on Consumer Price Index (CPI) was 9.87% in December while Wholesale Price Index (WPI)-based inflation was 6.16% during the same month. Currently, RBI tracks WPI inflation as the primary price indicator even as it takes into account all types of inflation numbers before drafting the monetary policy.

The committee asked the Central Government to ensure that the fiscal deficit as a ratio to GDP (gross domestic product) is brought down to 3.0 percent by 2016-17. “Administered setting of prices, wages and interest rates are significant impediments to monetary policy transmission and achievement of the price stability objective.