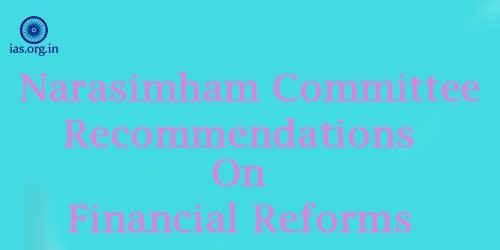 Narasimham Committee was established under former RBI Governor M. Narasimham on August 14, 1991, to look into all aspects of the financial system in India. The report of this committee had comprehensive recommendations for financial sector reforms including the banking sector and capital markets. The committee submitted its report to the Finance Minister in November 1991 which was placed on the table of Parliament on December 17, 1991.

The salient recommendations are:

1. Four tier Banking System should be introduced in the country

4. SLR for banks should be curtailed to the level of 25% within next 5 years. CRR should also be curtailed in various phases.

5. Banks should be given more autonomy and the directed credit should be abolished.

6. Primary targets for credit should be redefined and such credits should not be more than 10% of total credit.

7. Computerisation in banks should be promoted.

8. Banks should be authorised to appoint banking officials at their own discretion.

9. The duel control RBI and Finance Ministry on banks should be abolished and RBI should function only as a regulatory authority of banking system in the economy.

11. Granting resources to development finance institutions on concessional rates of interest should be abolished in phases within next three years. These institutions should be allowed to mobilize resources from the open market on competitive rates.Quick and effective liberal attitude should be adopted in the policy related to

12. Quick and effective liberal attitude should be adopted in the policy related to the capital market. The system of getting prior permission by the companies for their new share issues should be abolished.