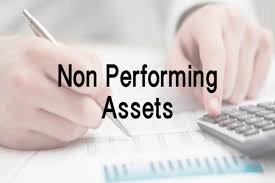 NPA i.e. Non-Performing Assets are the term loans given by banks on which either interest and/or principal have remained ‘overdue’ or have not been paid by the borrower for 90 or more days.

Any asset of bank can be of two types: Standard Assets and NPA

Reasons for NPA in India

For India, NPA is not an alien concept. It existed before too, but due to economic boom and flourishing Indian economy before 2008 crisis, it was not a threat to the banking sector and hence was not in news.

There are many factors which have led to this NPA problem in India. Some of the important ones are as follows:

1.  2000-07 was a period of economic boom. Indian economy along with the world was growing leap and bound during this time. To sustain this economic growth large amount of money was pumped in the energy and the infrastructure sector. But these sectors have long gestation period.
With the advent 2008 financial crisis, economies around the world slowed down. India too did not remain untouched. This economic slowdown adversely affected those long gestation projects thus loans started defaulting.

2. Government slow response and red tapism have also aggravated the problem. Profitable projects due to the passage of time and growing cost became infeasible and defaulted on loans.

3. Political interference and nepotism have also added to the NPAs. Political pressures were misused for getting loans without proper paper work or feasibility study.

4. Priority sector lending and loan waiver (mainly to farmers) have also added to the menace.

Time to clear some misconceptions

Here, we need to be clear that NPAs though bad for the health of the banking sector cannot be avoided. It is part and parcel of any healthy economy. Government or banks need not be blamed for favoring industrialists. As loans disbursed to large projects (Infrastructure, energy, MSME sector etc.) are the growth engines of any economy. It provides a fillip to the economic growth at the same time addresses the problem of unemployment.