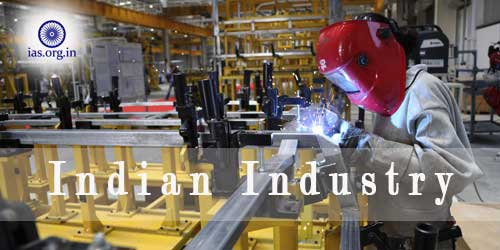 The term Industry indicates to an economic activity that is concerned with the processing of raw materials and manufacture of goods in factories. Indian Industry covers a wide range of activities and has enormous possibility of growth.

In other definition it has been said that the word ‘industry’ is a classification that indicates to a group of companies that are linked in terms of their principal business activities. There are various different industry classification in modern economies that are normally grouped into larger categories called sectors.

The word ‘Industry’ has its origin in the Latin word industria’ meaning diligence, “hard work”. The word still has its basic meaning intact and used with that meaning.

This sector of India Industry, although it is not a very old and conventional sector, in this last 10 years has recorded a huge expansion. The software industry augurs India’s standing as the knowledge based economy having a Compounded Annual Growth Rate (CAGR) of 42.3 per cent.

It has been roughly estimated that almost 35 million individuals are provided job opportunity by Textile Industry showing its major role that it plays in the nation’s economy. While the Textile industry shares 35% of the gross export income besides annexing 14% of value addition in merchandising section, it has 4 percent share in GDP (Gross Domestic Product).

As one of the major kinds, this sector of Indian Industry has a history of 400 years behind its existence. It has a past record of more or less 4% growth during the last ten years. Indian Steel Industry is the 10th largest in the World as it becomes obvious from the fact of its contribution of Rs. 9,000 crore of capital contribution; and not only this, it has also provided employment opportunities to more than 0.5 million people. In India the key players in this sector are : Steel Authority of India Limited (SAIL), Bokaro Steel Plant, Rourkela Steel Plant, Durgapur Steel Plant and Bhilai Steel Plant.

This sector of the Indian Industry has enormous possibility of growth. India’s share in the global food business is less than 1.5%. This situation prevails despite the fact that India is one of the key food producing nations across the world.

According to the GDP estimates the rough expansion of this sector is between 9-12%; however, the growth rate of this sector was measured around 6-8% during the tenth Five Year Plan period. The Food Processing Industry, that is estimated to increase by 37 million by 2025, caters job opportunities to around 1.6 million people.

This sector of the Indian Industry began its operations in 1867; it is rightly so claimed to be the oldest Indian Industry. India, the most flourishing oil markets in the in the World, has registered in the last few decades the expansion of top national companies, of this sector, such as ONGC, HPCL, BPCL and IOC.

This sector of Indian Industry is understood to be the oldest in terms of volume, domestic sector in India. In the context of productivity it renders a sense of pride to India by getting a place as the 12th largest producer of chemicals. Some of the other rapidly growing sectors under Chemical industries are petrochemical, agrochemical and pharmaceutical industries.

This sector of Indian Industry contributes 2.2% to 2.5% to GDP; however, one takes into consideration the GDP of total industrial sector it contributes around 10% to 11%. Even if mining is done on small scale it still contributes 6% of the entire cost of mineral production. Indian Mining Industry takes the responsibility of providing jobs to around 0.7 million individuals.

Industrial Rules and Policies in India

It has been widely acclaimed that if the industrial sector in India has to grow, then there has to be enough foreign capital in the country. However, it has also been a bitter fact that it is not easy to invest in India, a fact many foreign firms would immediately attest to.

However, the incumbent government, in an attempt to make things better for international firms, has amended some Foreign Direct Investment (FDI) rules that will allow interested Non-Resident Indians (NRIs) to invest in India.

It has been recently disclosed that in sectors having provision for automatic rules for FDI, foreign companies need not to obtain permission from Foreign Investment Promotion Board (FIPB) if they want to merge with a company in India or just acquire it.