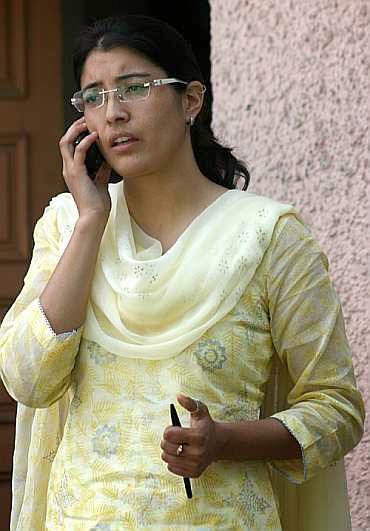 An emotional Ovessa Iqbal, the first Muslim girl from Jammu&Kashmir to ace the UPSC exam her third attempt. When good news finally came in after two failed attempts — Ovessa Iqbal, a resident of one of the country’s remotest areas, Ladakh, missed her mother the most. Having passed this year’s most-coveted UPSC exam revived fond memories of her mother whom she lost years ago.

“She was my biggest inspiration,”Ovessa, whose father is a farmer, told . Her mother had always egged her to appear in the civil services examination and when the happy news finally came in she was not there to see her daughter realise her dream.”She always had hope and faith in me and would often tell me that I could bring laurelsto my family”, said Ovessa, as she received news of her selection for the civil service. A lecturer in a government college in Leh, Ovessa’s mother was claimed by a train accident while on an educational tour in Andhra Pradesh way back in 2000.

25-year- old Ovessa, the first Muslim girlfrom Jammu&Kashmir to make it to country’s premier civil services exam, the success has come the hard way.”This was my third attempt to make it to the combined services select list. The previous two failures had almost dampened my hopes. But the continuous support from my family kept me going”, she said. The simple, down-to-earth girl, from one of India’s remotest region that remains cut- offfrom the rest of the country for six months due to heavy snowfall, had no airs about her success.

If I can do it, anybody can do it provided they work hard and remain focused”. She did her schooling from Moravian Mission School in Leh and then joined the Kendriya Vidyalaya from where she passed 10+2 exam. Later, she moved to Chandigrah and joined the Punjab University for her graduation in engineering.”I had two options: either to join the government service after my engineering or try my luck in the civil services. I chose to face the competition”, Ovessa said. Ovessa had last year qualified for the Jammu and Kashmir state civil services and currently is undergoing a training course as a civil servant in the Institute of Management and Public Administration in the state capital Srinagar.

Yesterday as I entered the campus, a colleague of mine broke the news to me. I immediately picked up the phone and called my father and broke the good news to him. He was thrilled”, she said. Seven candidates from the state this year have found place in the All India Civil Services selection list. Last year a local doctor Shah Faisal topped the list and opened gates for civil  services aspirants from Jammu and Kashmir. Along with selections of the seven more candidates from the state came the news that Shah Faisal has been allotted the Jammu and Kashmir IAS cadre and would bejoining on probation in the state next month.