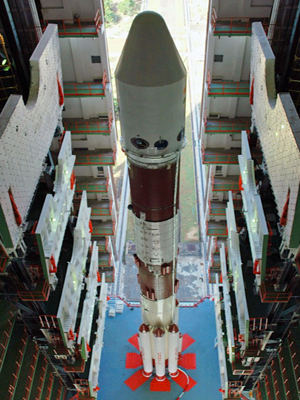 The Polar Satellite Launch Vehicle (PSLV) is an expendable launch system developed and operated by the Indian Space Research Organisation (ISRO). It was developed to allow India to launch its Indian Remote Sensing (IRS) satellites into sun synchronous orbits, a service that was, until the advent of the PSLV, commercially available only from Russia. PSLV can also launch small size satellites into geostationary transfer orbit (GTO).

As of 2014 the PSLV has launched 65 satellites / spacecrafts (30 Indian and 35 Foreign Satellites) into a variety of orbits. Some notable payloads launched by PSLV include India’s Chandrayaan-1 lunar probe and the Mars Orbiter Mission. It is the most successful launch vehicle in ISRO, till date, with 25 consecutively successful flights out of 26 launches.

PSLV was designed and developed in the early 1990s at Vikram Sarabhai Space Centre (VSSC), Thiruvananthapuram, Kerala. The inertial systems are developed by ISRO Inertial Systems Unit (IISU) at Thiruvananthapuram. The liquid propulsion stages for the second and fourth stages of PSLV as well as the reaction control systems are developed by the Liquid Propulsion Systems Centre (LPSC) at Mahendragiri (Tirunelveli),Tamil Nadu.

PSLV is a four-stage rocket that uses a combination of liquid fueled and solid fueled rocket stages. The vehicle can fly in three different configurations to adjust for mission requirements.

The first stage is one of the largest solid-fuel rocket boosters in the world and carries 138 tonnes of Hydroxyl-terminated polybutadiene (HTPB) bound propellant with a diameter of 2.8 m. The motor case is made of maraging steel. The booster develops a maximum thrust of about 4,430 kN. Six strap-on motors, four of which are ignited on the ground, augment the first stage thrust. Each of these solid propellant strap-on motors carries nine tonnes of HTPB propellant and produces 677 kN thrust. Pitch and yaw control of the PSLV during the thrust phase of the solid motor is achieved by injection of an aqueous solution of strontium perchlorate in the nozzle to constitute Secondary Injection Thrust Vector Control System (SITVC).

The third stage uses 7 tonnes of HTPB-based solid propellant and produces a maximum thrust of 324 kN. It has a Kevlar-polyamide fiber case and a submerged nozzle equipped with a flex-bearing-seal gimbaled nozzle (±2°) thrust-vector engine for pitch & yaw control. For roll control it uses the RCS (Reaction Control System) of fourth stage.

The fourth and the terminal stage of PSLV has a twin engine configuration using liquid propellant. With a propellant loading of 2 tonnes (Mono-Methyl Hydrazine as fuel + Mixed Oxides of Nitrogen as oxidiser), each of these engines generates a maximum thrust of 7.4 kN. Engine is gimbaled (±3°) for pitch, yaw & roll control and for control during the coast phase uses on-off RCS. PSLV-C4 used a new lightweight carbon composite payload adapter to enable a greater GTO payload capability